Sangma is the elder brother of Chief Minister Sangma. 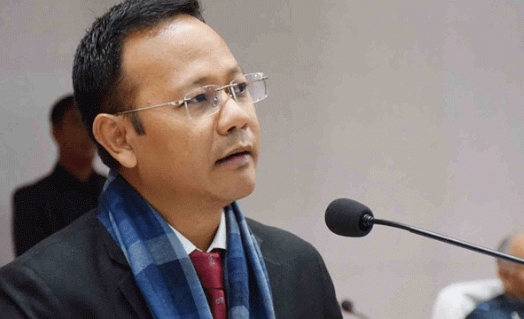 Shillong: Employees of Meghalaya Energy Corporation Limited (MeCL) on Tuesday resolved to agitate by April 26 if Chief Minister Conrad Sangma fails to comply with their charter of demands that includes relieving James Sangma as minister of the power department.

On Tuesday, the employees under the banner Coordination Committee of Registered MeECL Employees Associations and Unions, (CCORMAU) wrote a letter to Chief Minister Conrad Sangma urging him to constitute an independent inquiry into the alleged irregularities in the MeECL.

In the letter, CCORMAU also highlighted the power theft and CMD”s inspection at Byrnihat area, Enterprise Resource Planning, Smart Metering, Saubhagya Scheme, Special tariff to the Byrnihat Industries Association (BIA), One Time Settlement Scheme, Concessions during Covid 19 provided to the Industries, Power Banking and Swapping, which have created confusion and sense of insecurity among the employees.

“Moreover, the recent resignation of the Independent Director MeECL, Smti. L. Kharkongor (Retd.) IAS, which also has been highlighted in the public domain, citing displeasure over the haphazard style of functioning of the Board of Directors MeECL and the issue of Monetisation of land which could contravene with the Meghalaya Land Transfer Act 1971 being the reasons for tendering her resignation, have filled the employees with much concern,” the letter read.

“The Minister In-charge Power be relieved from the Power Portfolio to facilitate a free and fair investigation,” CCORMAU demanded.

Sangma is the elder brother of Chief Minister Sangma.

Some of the employees are upset that the CMD has conducted a surprise inspection of the Byrnihat Industrial Area.

Kembhavi have unearthed large scale manipulation of Electric meters to pilferage power in the industrial area.

Khembavi said that he would soon submit a report to the government on the surprise visit and the power theft and in all likelihood, a probe is on the card. If the probe establishes the role of the employees in this theft action more serious than mere transfer cannot be ruled out.

Moreover, the power department has threatened to disconnect the power of all defaulters who failed to clear their dues under a one-time settlement scheme.

However, the employees claim there are irregularities and scams in MeECL that have been “highlighted in the print and electronic media.”

James and Khembavi have brushed asides the allegations in the Assembly and also through press briefings.