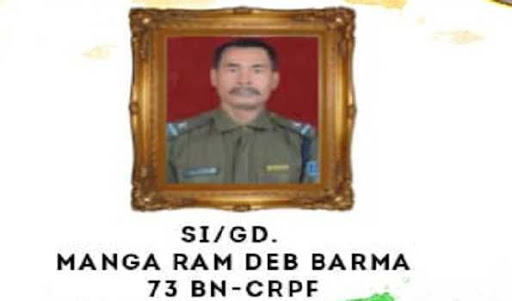 Agartala: The son of martyred sub-inspector Manga Ram Debbarma of CRPF’s 73rd battalion broke down in MBB airport here after seeing the coffin of his father on the shoulder of fellow jawans this morning.

“I am class 10 pass and doing petty business in the village and my younger sister Sreemila is studying B Sc Nursing in Bengaluru and youngest sister Sushimi is a student of class 10 in our village school. Due to Covid pandemic we all have been in the village and other relatives working outside have also returned. We spoke to Papa a day before the incident and asked him to come home. He assured us to come the next month but today he returned without any plan in the coffin,” a teary-eyed Rajeshwar said in the airport.

Manga Ram had paid a brief visit to his family a few days after lifting of lockdown and he was about come for a long live in summer, said another relative of the martyr present in the airport, adding that despite repeated requests by his family to opt for VRS and start a living in the village Manga Ram did not agree.

He would tell the family members and relatives that he was fortunate that God had given him the opportunity to serve the nation and he would serve as long as rule permitted.

After he was posted in Srinagar last year, his family and children persuaded him to opt for VRS but he refused.

“Had he accepted the proposal, today we would have not returned in a coffin,” rued the relative.

However, after paying tribute to the martyr at airport, Chief Minister Biplab Kumar Deb announced an ex-gratia of Rs 5 lakh to the martyr’s family from the state government.

“We shall always remember the braveheart and the state government is committed to stand behind the family for any of their needs,” Deb said.

The body was escorted to his native village Rambabupara of South Taidu in Gomati district where Manga Ram’s last rites will be performed with full state honours, following all family ritual and customs.

Manga Ram was martyred in a hit-and-run militant attack at Lawaypora area of Srinagar on March 25 last along with constable driver Ashok Kumar.

The CRPF officials said the attack was planned and carried out by the militants of LeT outfit. At least four heavily armed militants fired on the Mobile Bunker Vehicle of CRPF that was part of the Road Opening Party at Lawaypora in the early morning. By Dr Biswendu Bhattacharjee