He was speaking at an interaction session of MLAs, representatives of Urban Local Bodies & Panchayat, District Level Officers, Civil Society Organizations and beneficiaries held at the auditorium of Mayai Lambi College 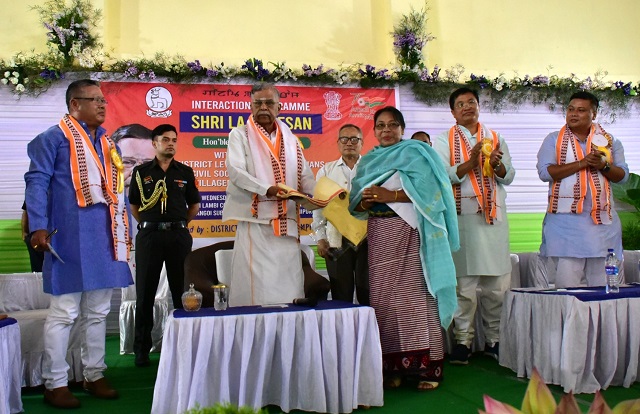 Imphal: Governor of Manipur, La. Ganesan has assured people that the State will see all-around development in the coming months.

He was speaking at an interaction session of MLAs, representatives of Urban Local Bodies & Panchayat, District Level Officers, Civil Society Organizations and beneficiaries held at the auditorium of Mayai Lambi College under Wangoi Sub-Division of Imphal West district Wednesday.

Governor said people have the right to express on any issue or ear their grievances before the authority whoever he or she may be and their issues should be addressed as soon as possible. He said, in most of the places he visited, he heard complaints made by the people and most of the complaints are of poor connectivity, deplorable road conditions, lack of basic amenities and poor healthcare facilities.

Admitting that most of the roads including in the hill areas are in need of taking care, La. Ganesan said, in the coming months, almost all roads will be repaired and people will enjoy a safe passage. He stated that development works which are being taken up in the State will take time to complete and all should cooperate with patience.

Governor further said that all should take care of one’s health as it is the only way to fight any disease. He said, with the support and cooperation of all stakeholders and people, we were able to fight the COVID-19 pandemic successfully and nowadays the rate of infection has decreased to a negligible rate.

He appealed to people to be very careful and maintain cleanliness and also to get vaccinated at least twice to fight the disease. Reiterating the commitment of the Centre to eradicate Tuberculosis (TB) by 2025, the Governor asked the district administration to conduct door to door surveys and identify TB patients and take steps.

Governor Ganesan expressed confidence that such an interaction programme or the Janata Darbar will definitely help to identify issues and grievances faced by the people and help concerned authorities to deal with the issues timely. He also assured the people that he will ask concerned authorities and if necessary will ask the Chief Minister to take steps in the interest of the people. Earlier, CSOs submitted memoranda and urged the Governor to look into the issues timely.