During the prolonged lockdown due to Covid-19, hotel boys Khomei and Tomba and the cook Chaoba have to stay in the hotel run at Moreh, a border town in Manipur neighbouring Myanmar. 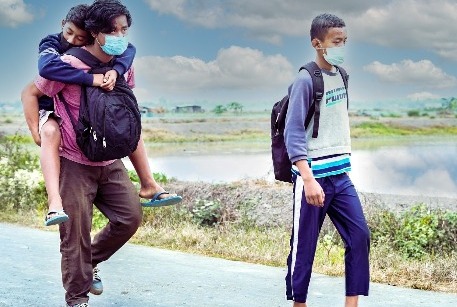 Imphal: Ajit Yumnam’s second Manipuri feature – 4/11   has been selected in the competition section of the 8th International Film Festival of Shimla 2022 to be held from August 26 to 28 in Shimla, Himachal Pradesh.

The film depicts an event during the Covid-19 pandemic. During the prolonged lockdown due to Covid-19, hotel boys Khomei and Tomba and the cook Chaoba have to stay in the hotel run at Moreh, a border town in Manipur neighbouring Myanmar. Chaoba provides two transgender women who work in a beauty parlour and are starving due to prolong lockdown in his place for stay. Chaoba advises the boys to treat them well.

On April 11, when the curfew is relaxed for a few hours on account of Easter Sunday which falls on April 12 and Cheiraoba which falls on 13, the three leave the place to reach their home at Gwaltabi village on foot covering more than 100 kilometres. On the way, when Chaoba rushes to get some medicine for ailing Khomei in a pharmacy he notices that his wallet has been lost. He runs back but he faces drug-related problems.

The pharmacist advises Chaoba that children must be sent to school and be taken back from workplace. At night, they are again caught by a mob taking them to be thieves. The chairperson of the village stops the people not to indulge in mob justice.

When they reach home, Tomba  and Khomei are happy to learn that they will go to school after the lockdown.

The film – 4/11 is produced by Brojen Yumnam under Skyline Pictures. Ajit Yumnam wrote the screenplay based on the story of renowned playwright Channa Lukhoi. Imo Yumnam is the cinematographer and Sushil Yumlembam is the editor. Master Gautam as Tomba and Master Wangthoi as Khomei  are non-actors.

Filmmaker Ajit Yumnam said, “I want to tell the story of the suffering of the people, especially the poor during the lockdown of Covid-19 pandemic. The child labour and discrimination of transgender people should not be encouraged at all.”

Born in 1962 at Mayang Imphal Thana Awang Leikai, Ajit Yumnam is a Mechanical Engineering graduate from an Engineering college in Chennai and later did the graduate and postgraduate in English in Annamalai University, Tamil Nadu.   He joined the profession of filmmaking in 2004 working as a screenwriter and assistant director in many films made in video format.