Leader of the House N. Biren Singh stated that the State Government has implemented the Economic and Skill Development Programme (ESDP) under MoBC Department. 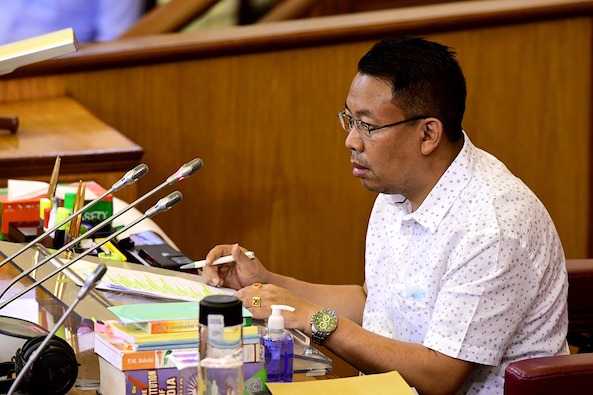 Imphal: On the sixth day of the 2nd Session of the 12th Manipur State Legislative Assembly, the House today unanimously passed five Demands for Grants amounting to Rs. 5358, 42, 59,000.

While giving clarification On Policy Cut Motion raised on Demand for Minorities and Other Backward Classes and Scheduled Castes Department, Leader of the House N. Biren Singh stated that the State Government has implemented the Economic and Skill Development Programme (ESDP) under MoBC Department. He informed that under this scheme, training is given for trades namely Plumbing, Barbering, Electrical Works, Masonry, Fishery Training, Mushroom Cultivation and Mobile vending training for 1-month and tool kits are provided by the Department on the completion of the training. While mentioning the Government programmes like Go to Hills, Go to Village, Meeyamgi Numit amongst others, N. Biren Singh highlights the various welfare schemes taken up by the State Government for balanced and inclusive development in both Hill and Valley Districts of Manipur.

Minister for Youth Affairs and Sports Department, Govindas Konthoujam while giving clarification on the policy cut informed that there will be a sports talent hunt in far-flung, remote areas and hill Districts from next year onwards for admission to the National Sports Academy.