The  3 Padma Shree Awardees namely Mayengbam Muktamani, Lourembam Binodini and Konsam Ibomcha Singh were also felicitated and handed over with a cash award of Rs. 1 lakh and shawl each. 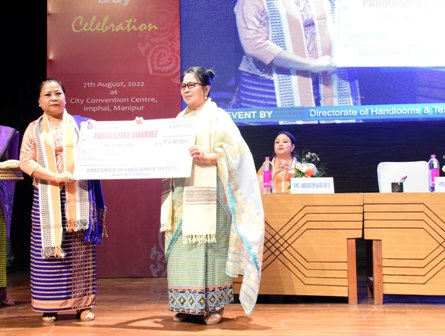 While addressing the gatherings, Nemcha Kipgen said that the Ministry of Textiles has taken various initiatives for promotion and development of the handloom industry in the country.

The Minister continued that in these projects, 24 Diploma holders in Handloom & Textile technology will be engaged as Cluster Development Executives and another 24 Textile Designers from NIFT or NID or reputed Design Institute as Textile Designers for a period of 3 (three) years. A total of 46897 handloom weavers will be covered in these projects within the project period of 3 years, the Minister asserted.

The Minister for Textiles Nemcha further said that the State Government had initiated the Yarn Scheme in 2018-19 and the scheme is being proposed to continue further till 2026-27. The Loom Upgradation Scheme introduced in 2018 has provided a total of 6705 Frame Loom to 6705 weavers till 2021-22.

She also informed that the Department is preparing for registration of more products under the GI Act. The hashtag of My Handloom My Pride is the recognition that handloom cloth are our pride that weavers have woven, she added

During the occasion, the State Awards were handed over to outstanding handloom weavers and handicrafts artisans by the Department in recognition of their contribution to handloom and handicrafts in the State. As a part of encouragement, financial assistance of Rs.2.00 lakh to Rs.4.40 lakh were handed over to National and State Awardees for producing their award-winning item into commercial scale.

The  3 Padma Shree Awardees namely Mayengbam Muktamani, Lourembam Binodini and Konsam Ibomcha Singh were also felicitated and handed over with a cash award of Rs. 1 lakh and shawl each.

With an aim to boost the confidence of the handloom weavers and promote handlooms, the Ministry of Textiles, Government of India has been observing 7th August every year as the National Handloom Day from 2015 onwards. It may be mentioned that the celebration of the first National Handloom Day was started from 2015 with the Prime Minister of India, Shri Narendra Modi as the Chief Guest at Chennai.

The Ministry of Textiles has taken into account the Swadeshi Movement and boycott of foreign cloths as the solemn day for National Handloom Day which became an annual feature across the country.