Public leaders, village chiefs, CSO leaders, DLOs from different departments, and many people in the event. 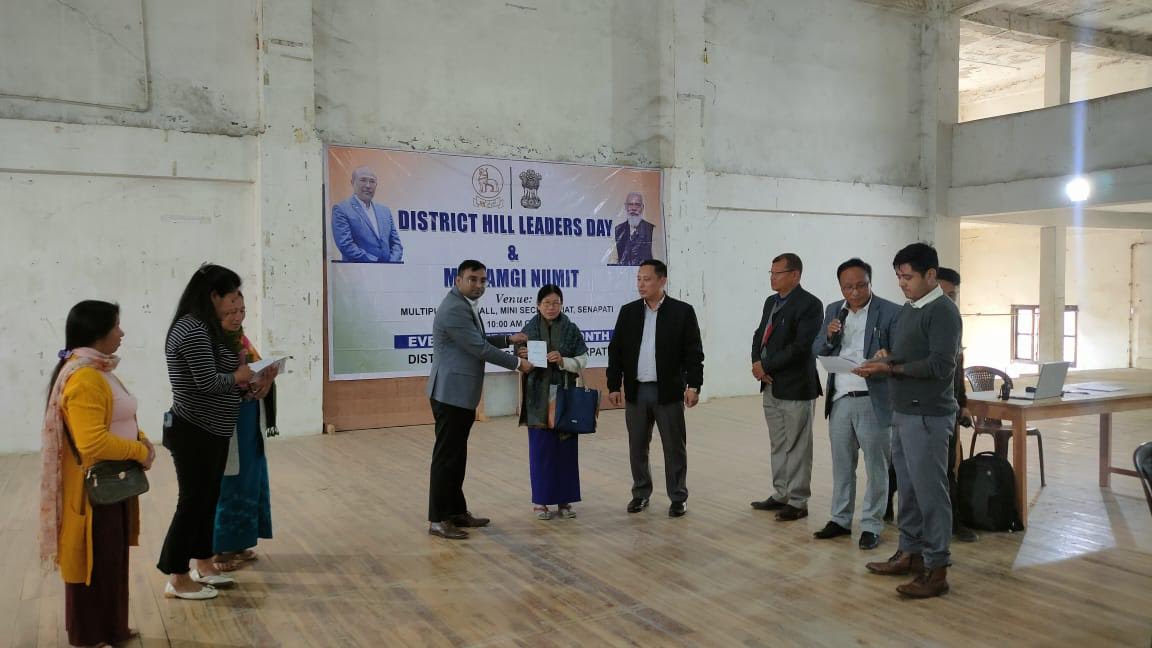 In Bishnupur Meeyamgi Numit for the month of December was organized by District Administration, Bishnupur at Panchayat Resource Centre in the Mini Secretariat complex Friday. Deputy Commissioner Lourembam Bikram accompanied by Addl. SP, SDOs, BDOs and DLOs heard the grievances of the people. H. Bobby Sharma, ADM, and Shri Ejaj Hasssan, AC to DC ensured the smooth conduct of the event.

Addressing the gathering, Lourembam Bikram reiterated that the success of any welfare scheme depends on the active participation and support of the people. Stating that every day is a Meeyamgi Numit for the District Administration, the DC encouraged the people to register grievances or complaints on any matter and not necessarily confined to enrolment for welfare schemes and benefits.

“Meeyamgi Numit” (People’s Day) was successfully organized by the District Administration Thoubal on Friday today at the Counting Hall of the Deputy Commissioner’s Office Complex for the month of December. As done in the preceding months, Deputy Commissioner, Thoubal, A. Subhash Singh, along with District Level Officers’ heard various grievances and demands of the public.

Speaking to the media, Deputy Commissioner said “Meeyamgi Numit” is a platform to meet and address the grievances of the people. The programme has brought hope amongst the people in the district that the government is continuously working for the welfare of the people. He expressed happiness that a large number of people continue to turn up every month to take benefit of various government schemes.

He said the  District Administration is committed to solving various problems and grievances of the public at the earliest in collaboration with the concerned departments. He said most of the grievances are related to old age pension schemes, CMHT cards and other schemes.

Around 107 written applications were received today relating to different schemes including applications for CMHT Card, old age & Widow pension card and grievances related to other departments like PHED, Police,MSPDCL among others.

Twenty (20) stalls of different departments were opened to meet the demand of the public including Police, CMO, ICDS, ZEO, MSPDCL, Veterinary, Agriculture and Fishery.

The Deputy Commissioner of Churachandpur, Sharath Chandra Arroju, joined by all District Level Officers and Officers from line departments interacted with the people to ensure that the grievances of the people were addressed adequately. He distributed pea, onion, and mustard seeds to the farmers from Agriculture and Horticulture departments.

As a part of the program, 36 different government departments set up tables. Vaccination program and Health check-up counters were set up by Health Department. About 50 persons were provided free medical check-ups.

A total of 38 complaints/applications were received out of which 21 were resolved on the spot and 17 were still pending.

Public leaders, village chiefs, CSO leaders, DLOs from different departments, and many people in the event.

Churachandpur district organizes ‘Meeyamgi Numit and Hill Leaders’ Day held earlier this month due to the Christmas holidays in the 3rd week.