Kausani, a perfect Himalayan retreat to break from the mundane world

Sitting high at an altitude of 1890 meters above sea level, with panoramic views of the majestic Himalayas giving company to the serene beauty of scenic valleys and fresh streams, Kausani is the perfect getaway for those looking for a peaceful walk into the lanes of captivating forests, absorbing the very best from the bounty of nature. 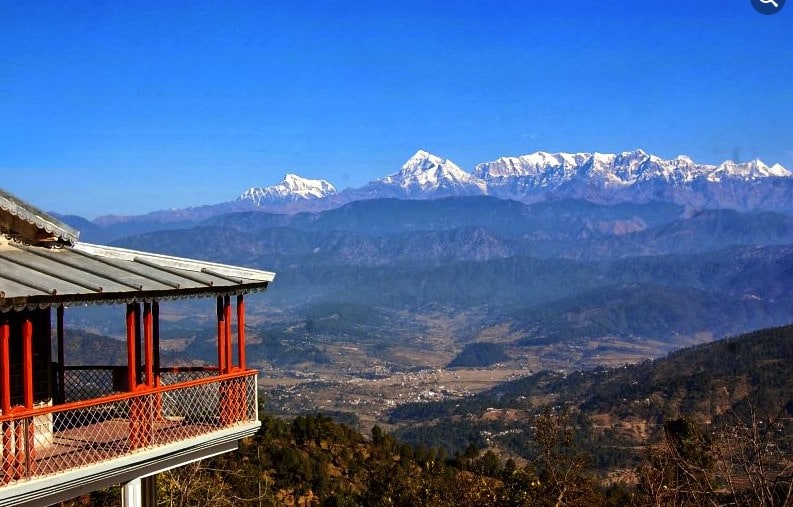 Kausani: An enchanting narrow ridge, thickly surrounded by lush pine trees, overlooking the picturesque town of Someshwar and snow-capped mountains in the background, welcome to the Switzerland of India, Kausani!

Sitting high at an altitude of 1890 meters above sea level, with panoramic views of the majestic Himalayas giving company to the serene beauty of scenic valleys and fresh streams, Kausani is the perfect getaway for those looking for a peaceful walk into the lanes of captivating forests, absorbing the very best from the bounty of nature.

Apart from the breathtaking views of nature in its full bloom, Kausani is also an excellent spot for stargazing, bird watching, and trekking, making it a must on every traveller’s wish list. Here are six alluring reasons to visit this serene place, brimming with the unmatched beauty of nature.

1) Great Himalayan peaks: Some of the most majestic snow-clad Himalayan peaks are clearly visible adjacent to one another (in continuation) from here. One can see the awe-inspiring peaks from almost anywhere in Kausani, including Nanda Devi, Nanda Ghunti, Chandni Kot, Trishul I, Maiktoli, Panwali Dwar, Baljuri, Changuch, Nanda Kot, Dangthal, Suj Tilla East, Rajrambha, the Panchchuli II, Panchchuli V and Nagling.

During a cloudless night, these snow-covered peaks are clearly visible as they shine in the moon light, giving a truly magical view.

2) Sky Watching: The skyline of Kausani is clear and it is one of the best places for star gazing, in fact the sky is so clear that many heavenly bodies, including the Andromeda galaxy and planets including Jupiter, Saturn, Mars and Venus are visible even without a telescope.

Kausani is low on artificial light, which means it is low on light pollution. Too much of artificial light impedes the visibility of stars and other heavenly bodies, said Ramashish Ray, who heads the Star Gate observatory here.

He explained why Kausani was an excellent venue for star gazing. “Kausani has very low pollution, both in terms of atmospheric pollution, and light pollution. In the light pollution index, which is from 1-9 Bortle, with 9 being the worst, Kausani is in the 2-3 range, which means very less light pollution.”

3) Pure air quality: As can be expected of a hill station, Kausani’s air quality is excellent, making it an ideal getaway from a big city like Delhi in case you want to escape pollution. Kausani’s air is kissed with the fragrance of Deodar, while ‘Raat ki Rani’ is fairly ubiquitous, which means you get the double bonus of enjoying the fragrance of both Deodar and Raat ki Rani during night time.

4) Anashakti Ashram: Established by Father of the Nation Mahatma Gandhi, when he came here in 1929, the Ashram is one of the few places, from where one can get the best view of mountain ranges. Gandhi ji, who named Kausani the “Switzerland of India,” came here for two days, but ended up spending 14 days here.

The Ashram derives it’s name from the book ‘Anashakti Yog,’ which he wrote during his time here. The Ashram also houses a museum dedicated to Gandhi ji. The Ashram architecture is a mixture of traditional and modern architecture and the facilities here are pretty basic, in line with the Gandhian idea of simplicity.

It is the most affordable place to stay in Kausani with rooms starting at Rs 500 per day and going up to Rs 1200 for bigger rooms. The larger rooms are big enough to accommodate families. The Ashram, which is operated by the Uttar Pradesh Gandhi Smarak Nidhi, plans to start dormitory facility soon. In case you wish to hire a car or a tour guide, the Ashram staff could arrange that for you. Mess facility is available and food is simple, affordable and nutritious. The Ashram also houses a Mahatma Gandhi themed museum.

5. Peaceful vacation spot for families: Kausani is not a commercialised tourist spot, in fact it is a sleepy town with no night life as such, you’ll hardly see a shop open after 8 pm. Due to the pressure of two organisations, namely the Anashakti Ashram and Laxmi Ashram, there is no liquor outlet here, so the drinking culture and loud behavior that is often practiced by tourists at other tourist spots, in not seen in Kausani. Long night walks with your loved ones while breathing in the fragrant pure air under luminous starry skies of Kausani is a special experience.

6) Shopping: Best souvenirs to take home are Kausani shawls made by the local artisans in their cottage industries. Kausani Tea from the local tea gardens is as good, if not better than the best of Darjeeling tea, Hilans offers some exotic pulses and spices unique to the mountains that are worth trying. These products are straight out of production units, striking out the involvement of middle men and making them pretty affordable.