Prime Minister Modi and President Putin “will review the state and prospects of bilateral relations and discuss ways to further strengthen the strategic partnership between the two countries”. 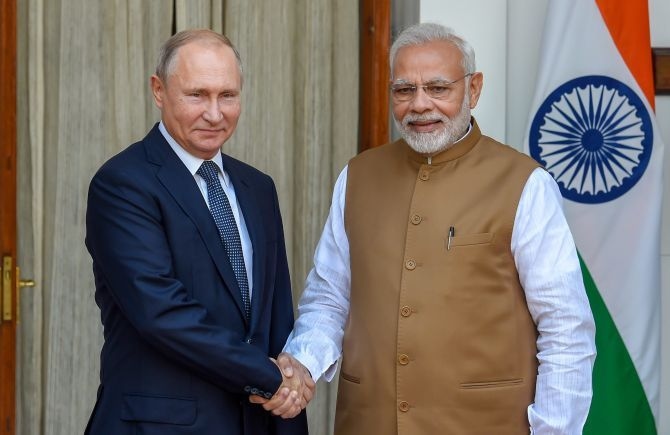 New Delhi: The inaugural India-Russia 2+2 meeting on December 6 between their foreign and defence ministers will see both sides discuss bilateral, regional and international political and defence issues, leading to the annual bilateral summit between Prime Minister Narendra Modi and Russian President Vladimir Putin late in the afternoon that day.

“There will be a series of meetings on that day, we foresee a very intensive engagement during the day, and culminating with the summit,” said Ministry of External Affairs spokesperson Arindam Bagchi in a briefing.

He said the day will begin with Raksha Mantri Rajnath Singh and his Russian counterpart Sergey Shoigu co-chairing the India-Russia Inter-Governmental Commission on Military-Technical Cooperation, in the morning, while External Affairs Minister S Jaishankar will hold a bilateral meeting with his counterpart Russian Foreign Minister Sergey Lavrov.

“These meetings will be followed by the inaugural meeting of the newly-instituted 2+2 dialogue mechanism at the level of the Foreign and Defence ministers,” he said.

“Both ministers are expected to discuss bilateral, regional and international political and defence issues with this format, that we have with very few countries,” he added.

In the afternoon, the 21st India-Russia annual summit will be held. “We look forward to welcoming President Putin to New Delhi for the summit,” he said.

Prime Minister Modi and President Putin “will review the state and prospects of bilateral relations and discuss ways to further strengthen the strategic partnership between the two countries”.

“The summit will of course offer an opportunity to exchange views on regional, multilateral and international issues of mutual interest,” he said, adding that a joint statement is proposed to be issued at the end of the summit “which will encapsulate the discussions, the understandings , and agreements signed during and also in the run up to the summit”.

The briefing comes as President Putin, in remarks on Wednesday while receiving the credentials of Ambassadors, including India’s new envoy Pavan Kapoor, said:

“Next week, I will visit India. During talks with Prime Minister Modi, we will outline new large-scale initiatives for the further development of the especially privileged Russian-Indian relationship, the Russian-Indian strategic partnership.

“This partnership brings real mutual benefit to both states. Bilateral trade shows good dynamics; ties are actively developing in the energy sector, innovation, space, and the production of coronavirus vaccines and medicines. There is extensive cooperation in the defence sector, including through the creation of joint ventures.

“India is one of the authoritative centres of the multipolar world with a foreign policy philosophy and priorities that are closely aligned with our own. I am convinced that, relying on strong traditions of friendship and mutual understanding, we will continue working together to expand the full range of Russian-Indian ties,” President Putin said.