After the ceasefire in the year 1994, he had declared that he would follow peaceful path of Mahatma Gandhi and would engage in non violent political struggle 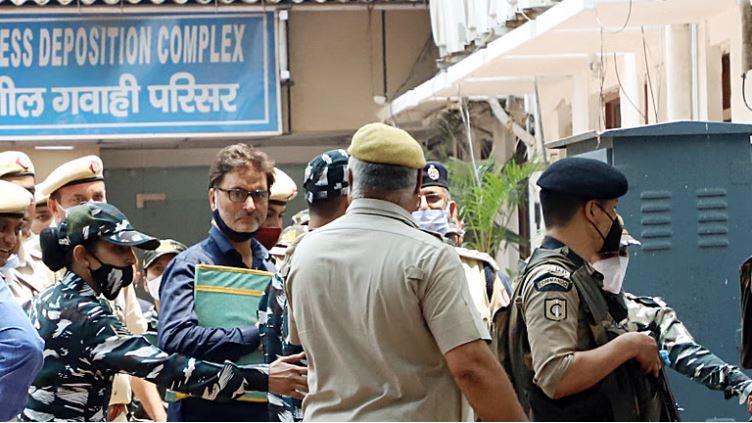 New Delhi: JKLF chief Yasin Malik, one of the first terrorists of Jammu and Kashmir, contended during the hearing at a NIA court here that he was following Gandhian principle, but was rejected by the court which said despite the large scale of violence engulfing the valley, he neither condemned the violence nor withdrew his protest.

The order said Malik had contended that he had given up violence in the year 1994. Before the year 1994, he had picked up a gun and he had never shied away from this fact and at that time also, he was known by his name as a person who was engaged in armed struggle.

After the ceasefire in the year 1994, he had declared that he would follow peaceful path of Mahatma Gandhi and would engage in non violent political struggle. Special Judge Praveen Singh also however observed that there was no reformation in him.

“It may be correct that the convict may have given up the gun in the year 1994, but he had never expressed any regret for the violence he had committed prior to the year 1994,” the order said.

The judge said when Malik claimed to have given up the path of violence after the year 1994, the government of India took it upon its face value and gave him an opportunity to reform and in good faith, tried to engage in a meaningful dialogue with him and as admitted by him, gave him every platform to express his opinion.

“However, as discussed in the order on charge, the convict did not desist from violence. Rather, betraying the good intentions of government he took a different path to orchestrate violence in the guise of political struggle. The convict has claimed that he had followed Gandhian principle of non violence and was spearheading a peaceful non violent struggle”.

The judge said the evidence on the basis of which charges were framed and to which convict has pleaded guilty, speaks otherwise.

“The entire movement was planned to be a violent movement and large scale violence ensued is a matter of fact. I must observe here that the convict cannot invoke the Mahatma and claim to be his follower because in Mahatma Gandhi’s principles, there was no place for violence, howsoever high the objective might be. It only took one small incident of violence at Chauri Chaura for the Mahatma to call off the entire non cooperation movement but the convict despite large scale of violence engulfing the valley neither condemned the violence nor withdrew his calendar of protest which had led to the said violence,” the order said.

On the prosecution’s demand of a death sentence for Malik, the Judge said the primary consideration for awarding sentence should be that it should serve as deterrence for those who seek to follow a similar path.

“It is correct that section 121 IPC provides for punishment of death sentence in case a person is proved to have committed an offence punishable … However, it has now been well settled that merely because the offence provides for capital punishment, the same cannot be handed over to the convict in a routine manner or as a matter of rule,” the judge said.

“The net result of the judicial pronouncements is that death penalty should be awarded in exceptional cases where the crime by its nature shocks the collective consciousness of the society and has been committed with unmatched cruelty and in a gruesome manner,” the Judge said.

He further said that “certainly death crime was committed”, and it was in the form of conspiracy by instigating, stone pelting and arson and large scale violence.

“However, the manner of the commission of crime, the kind of weaponry used in the crime lead me to a conclusion that the crime in question would fail the test of rarest of rare case as laid down by Hon’ble Supreme Court. Sr. PP for NIA has tried to impress upon the court that while awarding sentence court should consider that the convict was responsible for the genocide of Kashmiri Pundits and their exodus. However, I find that as this issue is neither before this court, nor has been adjudicated upon and thus court cannot allow itself to be swayed by this argument,” the Judge said adding that the case did not call for awarding death sentence as demanded.