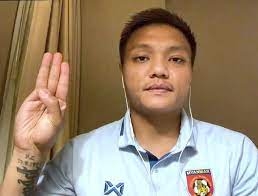 Tokyo: Japan has decided to temporarily allow the Myanmar’s national team footballer who refused to return home and sought refuge in the far Eastern nation.
Japan approved a six-month visa for Pyae Lyan Aung, the goalkeeper on the Myanmar national football team.
Aung had refused to return home with his teammates last month. Myanmar national team had visited Japan to play a world cup qualifier.
Aung says that he fears for his life as he made a three-finger salute during a recent World Cup qualifier near Tokyo.
The three finger salute is a sign of protest against the military coup in his country.
The goalkeeper has been granted a “designated activities” visa, permitting him to stay and work in the country for six months.