India’s Permanent Ambassador to the UN TS Tirumurti, in his remarks at a UN Security Council open debate on the Middle East on Wednesday, “reiterated India’s firm and unwavering commitment to the peaceful resolution of the Palestine issue.” 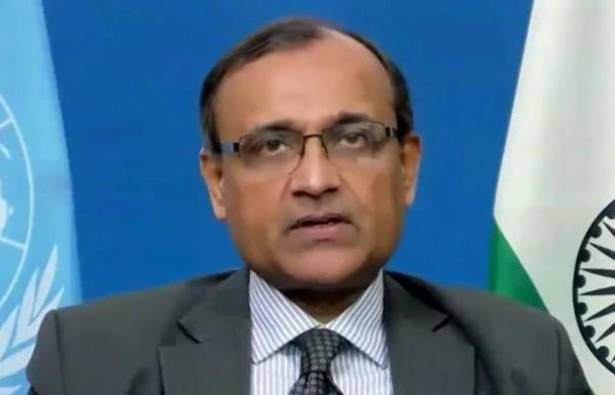 United Nations: India has voiced deep concern at the recent developments – the ongoing violence, settlement activity and evictions — in the West Bank, Jerusalem and Gaza and reiterated its support for a negotiated two-state solution.

India’s Permanent Ambassador to the UN TS Tirumurti, in his remarks at a UN Security Council open debate on the Middle East on Wednesday, “reiterated India’s firm and unwavering commitment to the peaceful resolution of the Palestine issue.”

He said India supports a negotiated two-state solution leading to the establishment of a sovereign, independent and viable State of Palestine living within secure and recognized borders, side by side at peace with Israel.

“Resolution 2334 was adopted by this Council to reaffirm the international community’s firm commitment to preventing the erosion of the two-state solution”, Tirumurti said.

“We are deeply concerned by the recent developments in the West Bank, Jerusalem and Gaza. Unilateral measures unduly alter the status-quo on the ground, undercut the viability of the two-state solution and pose serious challenges to the resumption of peace talks,” he said.

He said the international community “must also send a strong signal against any step that would prevent the possibility of durable peace between Israel and Palestine”.

“We are encouraged by the direct contacts between the Israeli and Palestinian leadership,” he said, referring to the meeting between Palestinian President Mahmoud Abbas and Israeli Defense Minister Benny Gantz in late December.

“Initiatives which are in the interest of both parties, help maintain stability and discourage possible recurrence of terror and violence,” he added.

He urged on the need for a “clear roadmap for early resumption of direct negotiations on all final status issues”.

“Absence of these direct talks on key political issues has asymmetrical costs for both Israelis and Palestinians and does not augur well for long term peace in the region,” Tirumurti stated.

India’s statement comes as the UN’s Middle East envoy, Tor Wennesland, told the Security Council on Wednesday that urgent action is required to prevent further deterioration of the economic, security and political situation across the Occupied Palestinian Territory.

He said the fiscal situation of the Palestinian Authority (PA) continues to be dire, threatening its stability and putting service delivery at risk.

Meanwhile, ongoing violence affecting both Palestinians and Israelis, as well as settlement activity, demolitions and evictions, further diminish the prospects of a negotiated solution between the sides, he added.

On Tuesday, Palestine warned Israel against evicting Palestinian families from their homes in East Jerusalem.

The Palestinian President condemned the demolition of two houses for the Salhiya family in the Sheikh Jarrah neighborhood of east Jerusalem, terming it a war crime and warned that the Israeli government bears responsibility for its dangerous repercussions.

“The Israeli attempts to evict the Salhiya family from their home in Sheikh Jarrah neighbourhood fall within the framework of forced displacement,” said President Mahmoud Abbas said in a statement.

The statement said Israel’s use of force for eviction and approval of building thousands of settlement units would escalate tensions in the Palestinian territories.

Palestinians want East Jerusalem as the capital of their future independent state, while Israel insists that all of Jerusalem should be its eternal capital.

Sheikh Jarrah saw several confrontations between Palestinian protesters and Israeli police in the aftermath of an Israeli court’s verdict to evict Palestinian families.

Resolution 2334, adopted by the Security Council on 23 December 2016, stated that Israeli settlements constitute “a flagrant violation under international law” and that all settlement activities in the occupied Palestinian territory, including East Jerusalem, must “immediately and completely cease.”

The resolution said the expansion of settlements threatens the viability of a two-State solution and international law must govern the occupation and the relations between Israel and the Palestinians. It also called on States to distinguish between the territory of the State of Israel and the territories Israel has occupied since 1967.