The Air Force Chief said Confidence Building Measures are on between India and China and the IAF sees to it that none of theCBMs is violated. 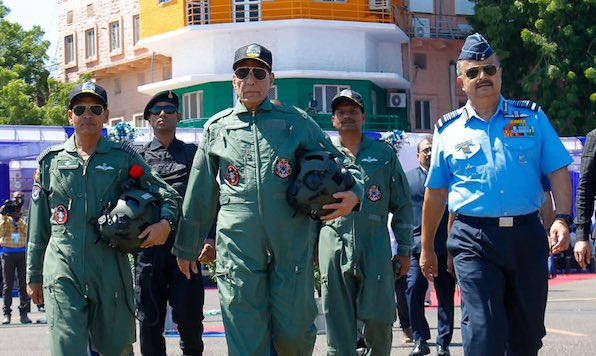 New Delhi: The India Air Force is continuously monitoring the situation along the LAC, and efforts are being enhanced, Air Force Chief VR Chaudhari said on Tuesday. The IAF Chief also said that the benchmark for normalcy can only be a return to status quo.

“Disengagement has taken place in certain areas along the LAC. However we keep monitoring the situation as far as the PLA Air Force goes. You are aware that the infrastructure development continues to take place at a rapid pace across the LAC particularly in Eastern Ladakh,” the Air Force chief said at a press conference ahead of the Air Force Day.

“As regards to recent air violations or incursions, we continuously monitor it and we are continuously enhancing our air defence efforts there. We have increased the presence of radars. appropriate, non escalatory air defence measures are always taken on time. I think we have been able to signal our intent and state of readiness with the actions we have taken so far,” he said.

The Air Force Chief said Confidence Building Measures are on between India and China and the IAF sees to it that none of CBMs are violated.

“If there is any violation… We have an Air Force Officer who is a representative in border talks. The air violation cases have been taken up. We have not established any hotline but we will use Army hotline for communication about air violations,” he said.

Asked about China’s remark on recent disengagement normalising situation along the LAC in Ladakh where Indian and Chinese soldiers have been engaged in a stand-off, the IAF Chief said, “The benchmark to judge whether situation is normal (along LAC), I think the best benchmark will be to return to status quo and complete withdrawal from all points all along the LAC, that is the ideal situation that we look for”.

“We continue monitoring the developments along the LAC, our preparations in terms of infrastructure, equipments, training, tactics, is a continued effort irrespective of whether we see any belligerence on the part of China or not,” he added.

India and China on Tuesday carried out verification to confirm withdrawal of troops from Patrolling Point (PP) 15 in the Gogra-Hot Springs area of Eastern Ladakh, marking the completion of the disengagement.

India and China recently announced that their armies had begun to disengage from PP15 in Gogra-Hot Springs.

Sources said both India and China moved back their frontline troops to the rear from the face-off site of PP15 and dismantled temporary infrastructure there as part of a five-day disengagement process. A temporary buffer zone has also been created.

The External Affairs Ministry has said that the two countries will take up remaining issues along the LAC after the disengagement at PP15.

The standoff between India and China in Ladakh began in May 2020 when Chinese troops tried to unilaterally alter the LAC in Eastern Ladakh sector, where the border is not clearly demarcated.

The subsequent rounds of talks resulted in disengagement in Pangong Lake and Gogra areas. The friction points at Demchok and Depsang remain.