Malaysia were under pressure early in the first quarter and were lucky to go into the second quarter at level footing, having survived a couple of big chances, particularly when Enrique Gonzalez hit the crossbar from a couple of metres out. 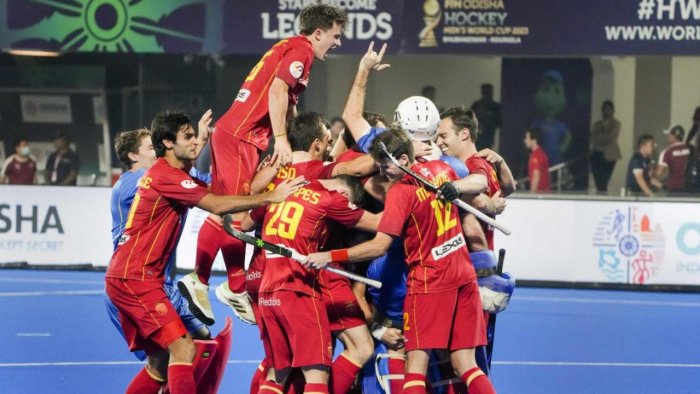 Bhubneswar: Spain beat Malaysia 4-3 in penalty shootout in a thrilling crossover match to qualify for the quarterfinals of the FIH Men’s World Cup after both teams were locked 2-2 here on Sunday.

Spain now face title contenders and Pool A toppers Australia in the last-eight stage on Tuesday.

Malaysia were under pressure early in the first quarter and were lucky to go into the second quarter at level footing, having survived a couple of big chances, particularly when Enrique Gonzalez hit the crossbar from a couple of metres out.

Malaysia started to get on the front foot a bit more in the second quarter but neither team was able to carve out any high quality scoring opportunity in the 15 minutes, and as the half-time whistle blew, the teams remained tied on 0-0.

The second half burst into action as Malaysia showed why they are such a big threat on the attack as a long pass from inside his own half, by Faiz Jali, found form man Faizal Saari who received the ball in his stride just outside the Spanish circle and unleashed a powerful shot on the reverse to beat Adrian Rafi.

The goal sprung Spain into action and they committed more players to the attack. Spain equalised through a Marc Miralles penalty stroke in the 41st minute and snatched the lead a minute later as a mesmerising run by Pere Amat led to a cross which was turned into an empty goal by Gispert at the far post, leaving Malaysia to chase the game in the final quarter.

The final quarter started with Malaysia thinking they had equalised through Amirul Azahar inside 20 seconds, but Spain reviewed and a backstick in the build up to the goal reversed the goal.

Three minutes later though Malaysia did score through Shello Silverius and there was no doubt about the validity of the goal this time, setting up an exciting final 10 minutes.

Spain earned a flurry of penalty corners over the final minutes, but their attempted drag flicks were saved each time by a combination of good first rushing and calm keeping, taking the first knockout game of the event into a shoot-out!

The teams could not be separated through the first 5 attempts in the shoot-out as the game moved to sudden death. Marc Miralles scored his first for Spain and Mario Garin, who was brought on by the red sticks to keep in the shoot-outs, stepped up and saved the Malaysian attempt to earn his team the win and a spot in the quarterfinals!

Marc Miralles was awarded player of the match and said: “Well played to Malaysia as well, we know this is a very tough way to lose a game. Really happy with our team’s performance throughout, coming back from a goal down to get the win and move on is great for us.”