It was one heck of a match with New Zealand coming back from 1-3 down to level the scores and then, defeating the hosts in an exciting penalty shootout 5-4. 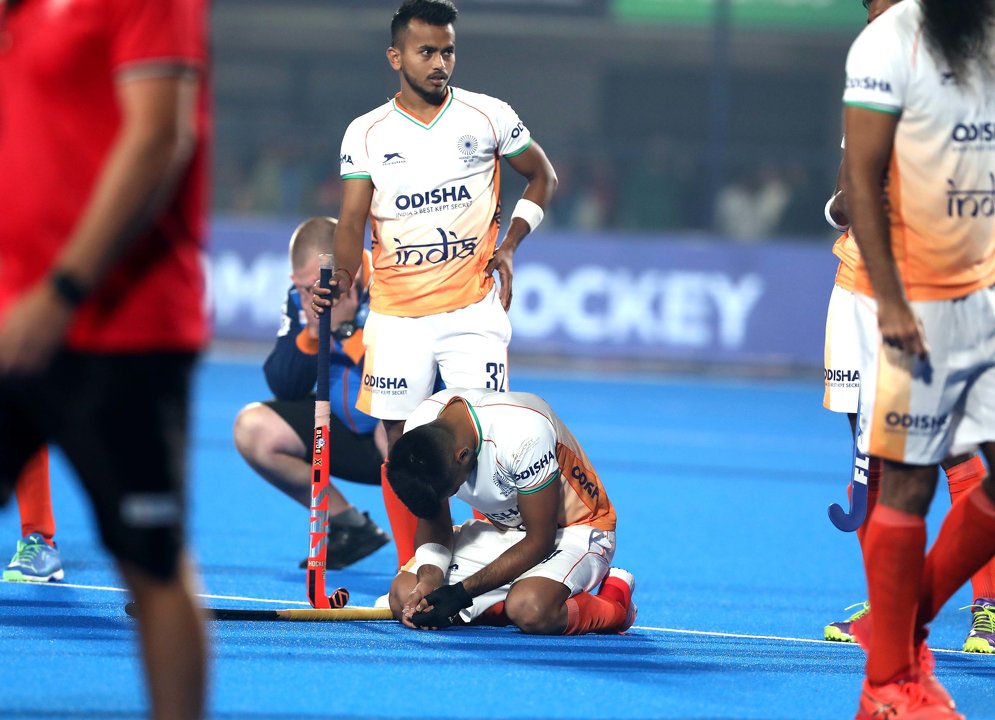 Bhubneswar:India were eliminated by New Zealand in their crossover match of the ongoing Hockey World Cup 2023 at the Kalinga Stadium here on Sunday.

It was one heck of a match with New Zealand coming back from 1-3 down to level the scores and then, defeating the hosts in an exciting penalty shootout 5-4.

Having won the match, New Zealand will face defending champions Belgium in quarterfinals.

India were dominant in the first quarter in terms of territory and possession but in terms of big chances, the teams were level at one apiece.

New Zealand were the first to get a good shot on target, but Sreejesh was quick to step out, make himself big and make the save.

New Zealand had a huge chance to start the second quarter, but the shot attempt by Morrison went narrowly wide and India capitalised soon with a quick counter, that was smashed in from the right by Lalit, who was smartly found on the counter by Shamsher.

India added a second goal midway through the second quarter as a Harmanpreet drag flick was saved by the keeper, but the rebound looped up in the air and Sukhjeet Singh was the first to get to it and smash the high volley into an open goal.

The black sticks had their best opportunity to score just before the half as Findlay found Child on the left baseline and his pass across the face of the Indian goal was tapped in by Sam Lane to bring New Zealand back into the game.

Both teams traded a goal each in the third quarter, with India scoring first through a Varun Kumar penalty corner that snuck through the legs of Dominic Dixon, but New Zealand pulled back to within one again with Kane Russell beating Sreejesh from a penalty corner of his own, setting up an incredible final quarter of action.

India retreated into the defence to begin the fourth quarter while New Zealand turned up the heat. India conceded a penalty corner in the 50th minute and while the attempted flick from Russell did not make the contact he wanted, the follow up shot by Lane was brilliantly turned in by Findlay, with his back to the goal.

The final 10 minutes were filled with non-stop action as India failed to capitalise on their penalty corner opportunities, while Krishan Pathak was brilliant in stopping New Zealand shots on target, including once in the final second of the game to take the game to a shoot-out.

The shoot-out was a nervous affair all over again with 18 shoot-out attempts required to separate the two sides.

Both New Zealand and India had two attempts where a goal would have won the game for them, but Findlay and Lane missed for New Zealand, while Harmanpreet and Sukhjeet missed for India.

On the 17th attempt, Sam Lane gave New Zealand the lead and Shamsher Singh, who had missed once earlier, stepped up again, but his attempt was well saved by Leon Hayward, and New Zealand finally won it and went through to the quarterfinals while India went into the 9-16 classification matches.

Sean Findlay was awarded the player of the match and said: “We did it the hard way, coming back from goals down and with the missed opportunities early in the shoot-out as well, but this team has great fighting spirit and we just gave it our all and it’s a great start to the knockout stage hockey.”