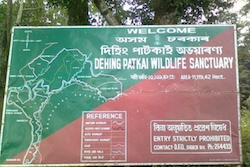 Guwahati: A division bench of the Gauhati High Court has ordered a judicial survey of an area near an eastern Assam national park where a unit of Coal India Limited (CIL) is said to be carrying out mining operations in violation of environmental laws.

A Division Bench of Chief Justice R.M. Chhaya and Justice Soumitra Saikia directed the Tinsukia district judge to study the Tikok Extension open cast project close to the Dehing Patkai National Park, a rainforest, and “record the proceedings whether any mining is taking place or not, and if yes, through and by whom”.

The court’s order was based on a set of Public Interest Litigations (PIL) challenging the April 2020 approval of the National Board of Wildlife for open cast mining in Tikok and the Saleki Proposed Reserve Forest.

The board recommended mining as 57.20 hectares of the 98.59-hectare Saleki had already been broken up by the North Eastern Coalfields (NEC), a CIL unit.

Advocate Santanu Borthakur, who filed one of the PILs along with colleague Vikram Rajkhowa, said their petition sought to declare Dehing Patkai, known as the ‘Amazon of the east’, as a heritage site under the Biological Diversity Act, 2002.

Arguing for another group of petitioners, advocates Debajit K. Das and H. Betala underlined the conflicting stands of various departments involved in the mining operations.

Directing the Tinsukia district judge to survey the areas “mentioned in the petitions” and “place on record whether any mining is taking place”, the court ordered the Assam Government to arrange for the judge’s visit to coal mining sites in the Tikok area.

The district judge was asked to submit the report to the High Court on or before November 1, the next date of hearing.

Coal mining operations in Tikok and the adjoining Tirap open cast project were temporarily suspended in June 2020 following reports of illegal extraction in forestlands. The operations were resumed in March 2022 with the NEC targeting a total output of 14 lakh tonnes of coal per annum from the projects.