Police said a case has been registered and an investigation began but no arrest is made yet. 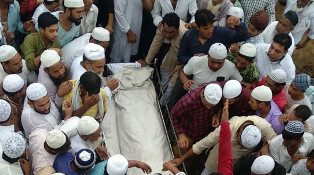 Agartala: A BJP gang has been accused of severely beating up the cook of a government guest house in Manu Bazar of South Tripura on Tuesday night, and later he died in the hospital for refusing to cook meat for them.

The victim is identified as Uttam Banik (42), a resident of the locality who has been working as a casual worker as a cook in the guest house of the State Forest department.

The victim’s family alleged that two local BJP leaders in the evening reached the guest house and ordered Uttam to cook meat for their party but he refused to do.

Angry with Uttam, the duo assaulted him badly and he fell unconscious. The whole night he was left uncared in the guest house and in the early morning somehow Uttam managed to inform his condition to his family. He was then rescued and taken to hospital in critical condition.

The doctors after a preliminary investigation diagnosed him with internal injuries in multiple organs. The matter was reported to the police and his statement was recorded.

Finally, on Wednesday night Uttam died in the hospital, which created widespread resentment and the villagers reached to the police station demanding exemplary punishment of the accused persons.

Police said a case has been registered and an investigation began but no arrest is made yet.

Meanwhile, CPM State Secretary who hails from Manu alleged that Uttam was a supporter of CPM party. After BJP led government came to power in 2018, he also faced several atrocities of the BJP cadres over 56 months.

He was assaulted twice earlier and his house was attacked and all the complaints are pending with police – no action has been taken.

“The BJP cadres who assaulted Uttam are known rowdies of the area and they are leading the motorbike-borne criminals of BJP in Sabroom sub-division for last three years. Police couldn’t do anything against them because of the local BJP MLA Shankar Roy who is using the gang for his money-making activities and crime. Had police taken action against the criminals earlier he could have not died today,” Chowdhury added.