Deadline for Bru resettlement in Tripura extended till Feb 23 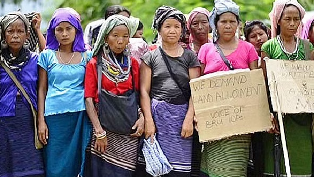 Agartala: With the persuasion of Tripura government, the centre has extended the deadline for completion of the rehabilitation process of displaced Brus of Mizoram in the state till February next year, said Deputy Chief Minister Jishnu Dev Varma on Thursday.

Jishnu Dev Varma and Chief Minister Dr Manik Saha on Wednesday reviewed the progress of the resettlement process in the state, also, took stock of the sporadic agitation in a few places against the Bru rehabilitation and directed the administration to solve the issues to complete the process within the time frame.

He further informed that 2,326 houses have been constructed for Bru families so far and in addition, infrastructure such as roads, electricity, drinking water, schools, Anganwadi centers, sub-health centers, and ration shops will be built in the rehabilitation areas.

As many as 3,106 families were provided cooking gas connections.