Mohammed Yasir scored again for the defending champions in the second half to end their winless streak against the Red Miners. 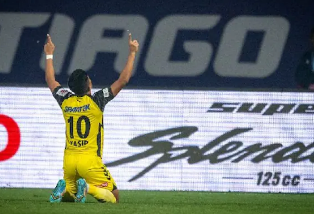 Jamshedpur: Hyderabad FC registered a fourth consecutive 1-0 victory this season as they edged past Jamshedpur FC in the Hero Indian Super League (ISL) at the JRD Tata Sports Complex here on Wednesday night.

Mohammed Yasir scored again for the defending champions in the second half to end their winless streak against the Red Miners.

The hosts made four changes to the side that lost to FC Goa in the last match. Head coach Aidy Boothroyd replaced injured Eli Sabia with Pratik Chaudhari in defence.

In the midfield, Wellington Priori dropped to the bench, and Laldinpuia Pachuau took his place. Jay Thomas and Harry Sawyer started as Farukh Choudhary and Ritwik Das started from the bench.

The visitors made just one change that saw Bartholomew Ogbeche start as Borja Herrera returned to the bench.

Despite being goalless, the first half was a decent one for Jamshedpur. None of the Hyderabad FC players tested Rehenesh TP.

At the other end, Laxmikant Kattimani barely managed to keep Daniel Chukwu’s header out of goal before being stretchered off with an injury after a collision with Harry Sawyer.

Before the visitors were forced to make a substitution, Jamshedpur had to replace Laldinpuia Pachuau in the 25th minute. Farukh Choudhary hopped on to replace the injured midfielder.

Towards the end of the first half, Sawyer entered the box and faced the goal from an acute angle. The striker opted to shoot rather than pass and saw his effort fly high. The game’s complexion changed early in the second half as Hyderabad FC drew first blood.

However, the ball eventually landed in front of an unmarked Yasir, who squeezed the ball in at the near post in the 48th minute.

Another win for Hyderabad FC takes them seven points clear at the top with 13 points. Their next challenge will come at home on November 19, Saturday, when they host Kerala Blasters.

Jamshedpur FC remain in ninth place after their third loss of the season. They play Chennaiyin FC at the Marina Arena on November 19, Saturday.