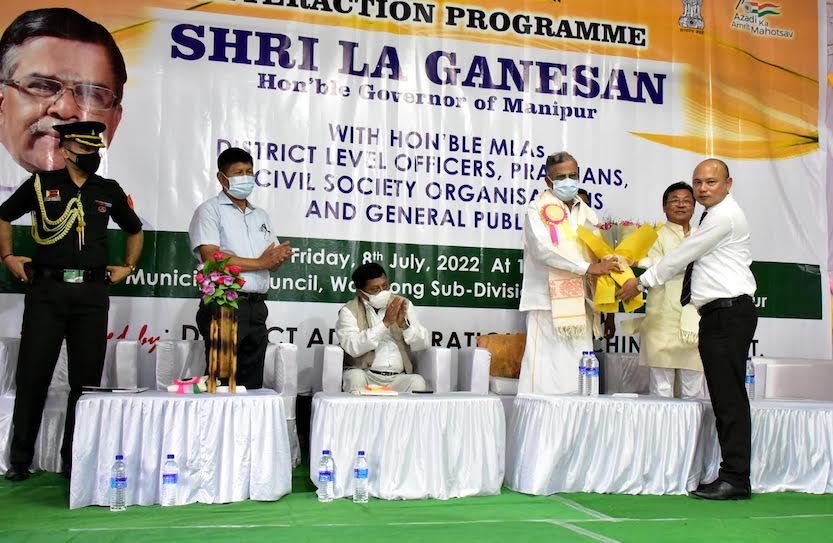 Speaking at the gathering, the Governor said that he felt immense pleasure today to interact with one of the most important sub-divisions of the valley in the state.  Although he had interaction earlier with District Level Officers, this is the first time for him to visit this Sub-Division of this District, he added.

The Governor further stated that the world is facing an unprecedented COVID-19 pandemic. However, due to the prompt action of our Government, this dreaded disease was almost under control. Nevertheless, unfortunately, during the last few days, the number is increasing in our state also.  Therefore, we still have to be very alert and careful. The Governor made an appeal to all sections of the society to get vaccinated, which is the best way to defeat this pandemic.  We may not be able to eradicate this dreaded disease forthwith but we will be able to keep it under control.

Therefore, to keep under control and prevent it, vaccination is a must. The relentless efforts of health workers and front-line warriors are indeed commendable and praiseworthy by one and all, he added.

The Governor said that he is appreciative to know that the Government of India has already committed to eliminate TB from the soil of India by 2025. Therefore, he would like to make an appeal to conduct a survey within this district to find out the number of TB patients and report to the concerned department so as to enable them to carry out appropriate remedial measures.

Also another important point is to contain and prevent drugs for which the State Government has already started taking action against the poppy plantation which was welcomed by one and all the people of Manipur from both valley and hills districts, he stated.  The Governor further stated that he was disappointed by knowing from reliable sources and local dailies that the number of drug user among the youth is increasing manifold during the last few months.

Again he also said that the State Government has already taken up massive tree plantation programmes in the State, but he was shocked to learn that few sections of our people resisted tree plantation programmes in a few places which is a bad precedent. This is not in the interest of few sections of the society, but it is in the interest of the people of the globe as well and appeals to all both the valley and hills not to resist this philanthropic job in future, he added.

The Governor also said that Swachh Bharat Mission, a clean India campaign is the responsibility of all of us. It is a mass movement launched by the Government of India under the leadership of our Prime Minister to make India, Clean India by 2019.

One important component of the campaign is the elimination of open defecation in the country. Manipur is well advanced on this front and large parts of the State have been declared as open defecation free. Cleanliness would keep everyone happy and healthy in all respects physically, mentally, socially and intellectually by reducing the chance of diseases and hope that this will continue on regular basis here also.

On his maiden visit, people expressed their happiness as this was the first time a Governor of Manipur ever visited the district.

During the interaction, people share their grievances of facing a shortage of doctors and staff at their Primary Health Centre and a lack of infrastructure at their Hospital. Shortage of teachers in Government schools, pathetic road conditions and lack of women police. And CMO Kakching informed that 79% of the district population has been vaccinated.

Replying to the grievances of the people, the Governor assured all that whatever problems that have been highlighted by the public, DLOs, CSOs as well as the representatives of the Constituencies, the related and important matters will be referred to the State Government for taking immediate necessary action. About the pathetic road conditions, the Governor said that we need to wait patiently for the completion of road construction, as of now road construction is still in progress.

Later the Governor had an interaction programme with DLOs of Kakching District at at Sugnu Municipal Council.

Meanwhile,  Governor La Ganesan extended “warm greetings to the people of Manipur, especially to our Muslim brethren on the auspicious occasion of Id-UL Zuha”.

In his message, Governor Ganesan said that “Id-Ul-Zuha is the festival of sacrifice and signifies the spirit of sacrifice rising above the narrow barriers of one’s ego and self-interest for the good of all. The festival promotes tolerance, harmony and goodwill amongst different communities”.

On this occasion, governor Ganesan called on all to forget differences and usher in an era of peace and harmony in Manipur,