The awareness campaign had been carried out in line with the Manipur Plastic Policy, 2022 for effective management of plastic waste and complete elimination of single-use plastics in the state. 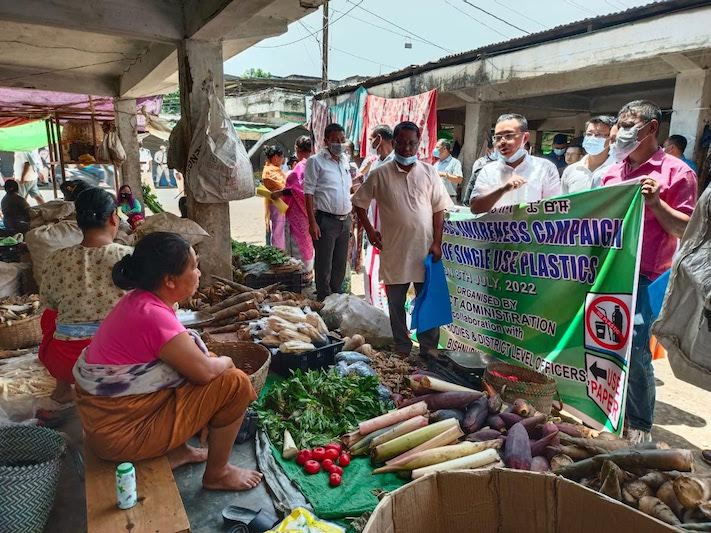 Bishnupur:  The District Administration, Bishnupur in association with Urban Local Bodies and District Level Officers Friday organized a One Day Mass Awareness Campaign on the ban of single-use plastics (SUP) at Bishnupur Bazaar. The awareness campaign will continue all through this month.

The awareness campaign had been carried out in line with the Manipur Plastic Policy, 2022 for effective management of plastic waste and complete elimination of single-use plastics in the state.

Addressing the gathering of the Mass Awareness Campaign, Deputy Commissioner, Lourembam Bikram stated that the District Level Task Force had been formed to coordinate the implementation of the Manipur Plastic Policy, 2022 at the grassroots level.

The DC further informed that the ban will be enforced from August 1 covering the sale, use, distribution, stocking, manufacturing and import of SUPs. He said that defaulters could be prosecuted and penalties will be imposed as permissible under the law which may extend to five years imprisonment including a fine up to one lakh rupee.

Lourembam Bikram also emphasized on the use of jute and bags made out of clothes or jute as an alternative to polythene bags. He also stressed on the need to revive the practice of bringing one’s own carry bags while going to market and shopping.

Stating that Bishnupur is one of the main tourist hotspots of the State, the DC stressed that it is important to maintain cleanliness in the district by abandoning the use of SUPs. He also discouraged the use of single-use plastic items such as plates, cups, glasses, cutleries and wrappers or packing films to avoid littering in tourist spots.

While informing that similar awareness drives on SUP ban will be carried out at different district markets, Lourembam Bikram appealed for cooperation and support from the people in the interest of the environment and future generations.

Also speaking on the occasion, SP Bishnupur, N. Herojit advocated against the use of plastic bags by saying that the hazards of plastic far outweigh the convenience of using them. He also pointed out that single-use plastics are hard to dispose of as it would take many years to degrade.