The last two seasons saw the league being played from within the confines of the Bio Bubble, as all the matches were played across Kolkata and suburban areas of Kalyani and Naihati. 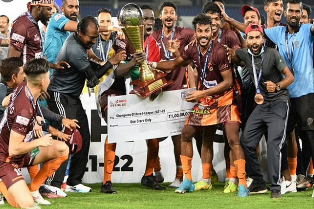 Kolkata: Defending champions Gokulam Kerala FC will take on last year’s runners-up Mohammedan Sporting Club in the I-League opener at Malappuram, Kerala, on November 12 as the All India Football Federation released a tentative fixture on Monday for the season- 2022-23.

The last two seasons saw the league being played from within the confines of the Bio Bubble, as all the matches were played across Kolkata and suburban areas of Kalyani and Naihati.

With the COVID restrictions lifted, the I-League is once again a pan-India affair, as 12 clubs are set to play in as many as 13 venues across the country.

Gokulam Kerala will play six of their home matches at the Payannad Stadium in Malappuram, while the other five will be played at the EMS Stadium in Kozhikode, where they have already been playing in the previous campaigns.

The Bakshi Stadium in Srinagar will also make its I-League debut, with Real Kashmir FC shifting to the venue from February onwards.

The Deccan Arena in Hyderabad and the Chhatrasal Stadium in New Delhi will be the other two debuting venues in the league this season for Sreenidi Deccan FC and Sudeva Delhi FC, respectively.

Meanwhile, the I-League will return to one of its favorite venues, South Bombay, once again, with Kenkre FC hosting their home games at the iconic Cooperage. Over in Delhi, the historic Ambedkar Stadium will play host to Rajasthan United FC.

Amongst the other clubs, Mohammedan Sporting will operate from the Kishore Bharati Krirangan, Kolkata, Churchill Brothers FC Goa from the Bambolim Stadium, Goa, Aizawl FC from the Rajiv Gandhi Stadium, Aizawl, RoundGlass Punjab from the Tau Devi Lal Stadium, in Panchkula, while Imphal clubs NEROCA FC and TRAU FC will operate out of the Khuman Lampak Stadium.

“There’s a lot of excitement around this season’s I-League, with the league set to be held in the home and away format once again. We have taken great care to ensure that around 80 percent of the matches will be played under floodlights, and that goes to show how much development most of these venues have gone through,” said AIFF Secretary General Dr. Shaji Prabhakaran.

“I wish all the clubs the very best ahead of their campaign. May the best team win.

“We are committed to adding value to the Hero I-league by improving broadcasting quality and overall product quality. We have to already start working for the next season by actively involving clubs and our marketing partners to improve the value proposition. The new management is serious about a league structure that will drive football in India to a new level,” he added.