Washington and Seoul on Monday began one of their largest combined military air drills, which will end on Friday, BBC reports. 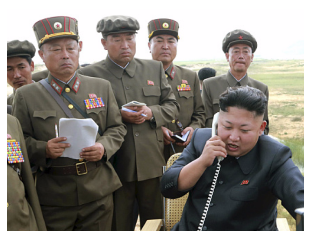 Pyongyang: North Korea has threatened the US with “powerful follow-up measures” if it does not stop conducting joint military drills with South Korea.

Washington and Seoul on Monday began one of their largest combined military air drills, which will end on Friday, BBC reports.

North Korea has also launched a series of missiles in recent weeks in response to the various drills. This follows intelligence reports that Pyongyang is preparing for its first nuclear weapon test since 2017.

“If the US continuously persists in the grave military provocations, (North Korea) will take into account more powerful follow-up measures,” said North Korea’s Foreign Ministry in a statement.

“If (Washington) does not want any serious developments not suited to its security interests, it should stop the useless and ineffective war exercises at once. If not, it will have to totally take the blame for all the consequences,” the BBC quoted the statement as saying.

Early in October, Washington deployed its nuclear-powered US aircraft carrier USS Ronald Reagan near the Korean Peninsula in a move that was widely seen as a warning to the North — and the carrier took part in a round of naval drills.

Seoul said the “rare” deployment showed the “resolve of the South Korea-US Alliance to respond sternly to any North Korean provocations”, the report said.

Pyongyang had in October said that its missile launches were a “simulation” of a nuclear attack on the South.

They claimed to have successfully simulated hitting South Korea’s military bases, ports and airports, and said the missiles were designed to carry tactical nuclear weapons.

North Korea has also stepped up its frequency of missile firings this year, carrying out over 40 launches so far, the highest ever.

Despite crippling sanctions, Pyongyang has conducted six nuclear tests between 2006 and 2017.