Schönbach said he did not believe in an impending attack on Ukraine. 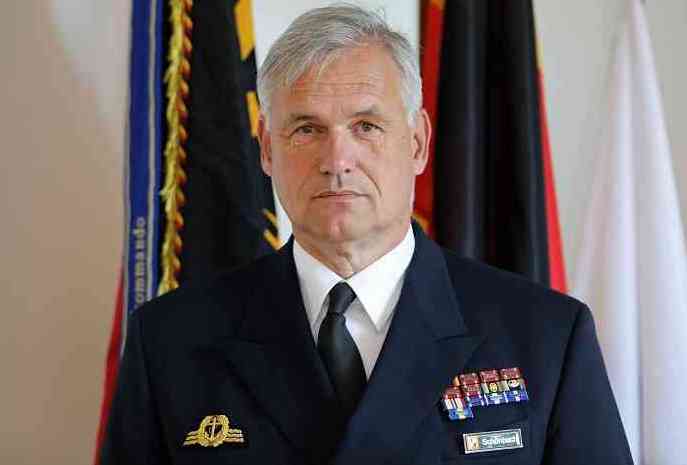 “I have asked Defense Minister Christine Lambrecht to relieve me from my duties with immediate effect,” Schoenbach said in a statement.

“The minister has accepted my request,” he added. Vice Admiral Kay-Achim Schönbach stepped down as the head of the German navy after publicly saying Crimea was lost to Ukraine and that Vladimir Putin “probably” deserved respect.

“The thoughtless comments I made in India on security and military policy are increasingly weighing on my office. In order to prevent further damage from the German Navy, the Bundeswehr, but above all from the Federal Republic of Germany, I consider this step to be necessary,” he said.

Schönbach is inspector of the Navy and thus the highest military officer of this branch of the Bundeswehr. As such, he is responsible for implementing Germany’s security policy strategies. During an official visit to India on Friday, however, he attracted attention with unsolicited statements about Russia that do not fit the official picture – especially in view of the Russian troop massing on the Ukrainian border – and make Germany appear again as an unreliable NATO partner.

“What Putin really wants is respect on an equal footing. And – my God – showing respect to someone costs next to nothing, costs nothing. So you would ask me: It’s easy to give him the respect he demands – and which he probably deserves,” the German Navy chief had said during a talk at the Manohar Parrikar Institute for Defence Studies and Analyses, in New Delhi.

The Ukrainian Foreign Ministry then summoned the German Ambassador to Ukraine, Anka Feldhusen, on Saturday evening about the “unacceptability of the statements made by the Commander-in-Chief of the German Navy, Kay-Achim Schönbach,” according to a letter from the ministry. They voiced unhappiness about his statement that “Crimea will never return to Ukraine and that our state (Ukraine) will not meet the membership criteria for NATO,” the letter said.

Schönbach, explaining his private views on the Ukraine crisis, said that he would like to have Christian Russia as a partner because of his Christian faith. Schönbach had said the fact that Russia wants to incorporate parts of Ukraine is “nonsense”. Schönbach said he did not believe in an impending attack on Ukraine.

He saw the real threat in China and would rather see Russia as a partner than as an enemy. “Even we, India, Germany, need Russia against China,” said Schönbach. “I’m a very radical Catholic, I believe in God and in Christianity. And there we have a Christian country – although Putin is an atheist, it doesn’t matter. This big country, even if it’s not a democracy, on our side as having a bilateral partner may keep it away from China.”

Schönbach said Russia’s actions in Ukraine needed to be addressed, but added that “the Crimea Peninsula is gone: It will never come back — this is a fact.” His remarks directly contradicted the official view held by the EU and the US. Washington and its allies say that Moscow’s 2014 annexation of the peninsula from Ukraine was unacceptable and must be reversed.

The navy chief’s comments come as Russia has gathered tens of thousands of troops on Ukraine’s borders and many worry that an invasion could be in the works. Russia has denied any planned aggression against Ukraine. Schönbach had issued an apology on his Twitter account.

“There is no need to quibble: it was clearly a mistake,” he tweeted earlier on Saturday. “My defense policy remarks during a talk session at a think tank in India reflected my personal opinion in that moment. They in no way reflect the official position of the defense ministry,” he wrote.