Stokes did it for England in the 2019 World Cup final at Headingley and did the business today, not discounting on the umpteen occasions the dashing southpaw has risen under pressure. 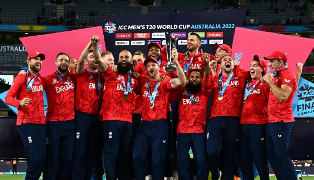 Stokes swung away across the line in the gap at mid-wicket for his unbeaten 52nd run off Mohammad Wasim Junior, which was a redemption time for him after what Carlos Brathwaite did to him at the Eden Gardens in 2016. He had lost a T20 final then with the ball, but today he won it for England with the bat 6 years later.

Stokes did it for England in the 2019 World Cup final at Headingley and did the business today, not discounting on the umpteen occasions the dashing southpaw has risen under pressure.

Having done so, Stokes roared and pumped the fists in the air while the England team barged onto the field in celebrations. The red dug out was all smiles and hugs while captain Jos Buttlet smirked as a satisfied leader.

Stokes scored 52 from 49 balls just when his team needed it most as England chased down Pakistan’s meagre total of 137/8 with 6 balls remaining.

This was Buttler’s first big tournament as captain and debuted with the title in his hands.

Pakistan, on the other hand, gathered themselves and knew England deserved the win today, as they did not get a big total under their belt. But, their bowlers turned the heat on England for most parts of the game till Shaheen Shah Afridi limped off the field, leaving Iftikhar Ahmed to bowl the remainder of his over.

England crossed over the line with a bunch of swashbuckling batting lineup, though Shaheen, Haris Rauf, Shadab Khan and Wasim Junior were among the wickets.

The dangerous Alex Hales was packed off for one as Shaheen produced a superb yorker and his pace-mates Rauf (2/23) and Naseem Shah (0/30), complimented his energy by bowling with great pace.

Buttler was removed by Rauf that emboldened Pakistan and bloated their belief, but Stokes soaked up the pressure and held one end and Harry Brook (20 off 23) managed to spend some time, but when he fell, Shaheen did some damage to his knee while taking the catch and that took the steam out of the Pakistani attack.

Stokes seized on Shaheen’s absence as he hammered a boundary and a six off Iftikhar’s final two balls to put England firmly in the driver’s seat. These hits made the chase easier for England with Moeen Ali joining the party with a couple lusty boundaries off Wasim Junior to put England in the sight of victory.

Curran and Adil Rashid were unplayable as the former was getting swing in the air and the latter getting turn and bounce. Both shared five wickets between them, while Chris Jordan ensured Mark Wood was not missed.

Buttler did not think twice before sending Pakistan in to bat in the overcast conditions at the MCG and the decision paid dividends as Curran packed off Mohammad Rizwan for 14.

Rashid scalped the prize wicket of Pakistan skipper Babar Azam who tried to bring the innings back on track as it was going at a snail’s pace.