The Gaurs will return to Fatorda for their next game against ATK Mohun Bagan on November 20. 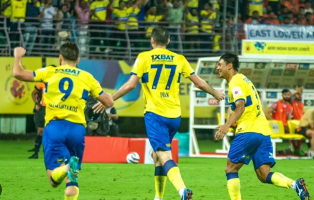 Kochi: Kerala Blasters ended their 10-game winless streak that spanned 6 years, against FC Goa with an assertive 3-1 victory in the Indian Super League (ISL) at the Jawaharlal Nehru Stadium here tonight, their first since November 2016.

Goals from Adrian Luna, Dimitrios Diamantakos and Ivan Kaliuzhnyi within the space of ten minutes secured all three points for the Blasters. Noah Sadaoui scored for the Gaurs.

Sahal Abdul Samad reclaimed his spot in the lineup as Saurav Mandal dropped to the bench for the hosts. For the visitors, Aibanbha Dohling replaced the injured Mohamed Fares Arnaout in defence, and Alvaro Vazquez was ushered straight into the starting eleven against his former club as Redeem Tlang dropped to the bench and Sadaoui moved to the wing.

Both sides’ defences were on top until the 42nd minute when Luna fired the hosts in front. Rahul KP’s cross from the right flank missed Luna’s diving header before it reached Samad. The winger’s off-balance shot rolled into the path of Luna who tapped it in from close range.

of half-time. Diamantakos was taken out by Anwar Ali after the Gaurs failed to clear their lines. The Greek striker stepped up to take it and sent Dheeraj Moirangthem the wrong way from the spot.

In the 52nd minute, Ivan Kaliuzhnyi went top of the ISL goals chart with a long-range screamer. Diamantakos squared the ball into the path of Kaliuzhnyi. The Ukrainian was allowed space and

time to pull the trigger with his left foot and Dheeraj had no chance of stopping the curling effort.

The Gaurs pulled one back in the 67th minute. Seriton Fernandes found an unmarked Sadaoui with a lofted cross into the box. The winger kept his header on target and pulled a goal back for his side, but the Gaurs couldn’t manufacture any substantial chances after that one. The solitary goal helped FC Goa’s goal difference enough to retain the fourth spot.

The three points lifted Kerala Blasters up into fifth place, level on points with FC Goa. The Blasters will look to capitalise on this momentum when they visit Hyderabad FC on November 19 for their next game.

The Gaurs will return to Fatorda for their next game against ATK Mohun Bagan on November 20.