The attempt spurred the United States into action and they had their first opportunity seven minutes later when Haji Wright sent a header wide off the target. 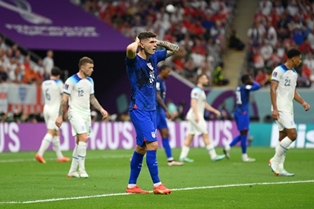 Al Khor:England missed a chance to secure a place in the FIFA World Cup last 16 while the United States’ hopes of advancing beyond the group stage were on a knife edge after the teams drew 0-0 in their Group B match on Friday.

England had a greater share of possession but managed just three shots on target while the United States had only one as both sides lacked a cutting edge in attack.

The result at Al-Bayt stadium keeps England on top of the group, a point ahead of Iran and two points ahead of third-placed United States, with each team having one group game remaining.

The attempt spurred the United States into action and they had their first opportunity seven minutes later when Haji Wright sent a header wide off the target.

Weston McKennie then squandered a gilt-edged chance to put the United States ahead as he volleyed over the crossbar after Sergino Dest’s dangerous cross from the right flank.

Christian Pulisic went closer shortly after, lashing a left-footed drive from distance that cannoned off the bar.

The Chelsea midfielder was at the heart of most of his team’s attacking forays and he went close to scoring again when he nodded just wide of the post after another Dest’s delivery from the right.

Shaw arguably created England’s best chance of the first half, darting toward the byline before cutting a cross back for Saka, whose shot sailed over.

England were relentless and again had American hearts fluttering as Mason Mount’s effort from the edge of the box was palmed away by Matt Turner.
The second half was even more staid than the first as both teams struggled to break down their opposing defenses.

United States midfielder McKennie should have done better as he blazed an attempt into the stands despite finding himself in space with more time than he probably realized.

England went close to breaking the deadlock in the closing stages when Kane sent a header wide after a sumptuous free-kick from substitute Jack Grealish.