Later, Congress delegation led by MLA Sudip Roybarman met the Director General of Police seeking a reply to why are BJP goons attacking opposition supporters in front of police and why police didn’t take action against the perpetrators despite specific complaints. 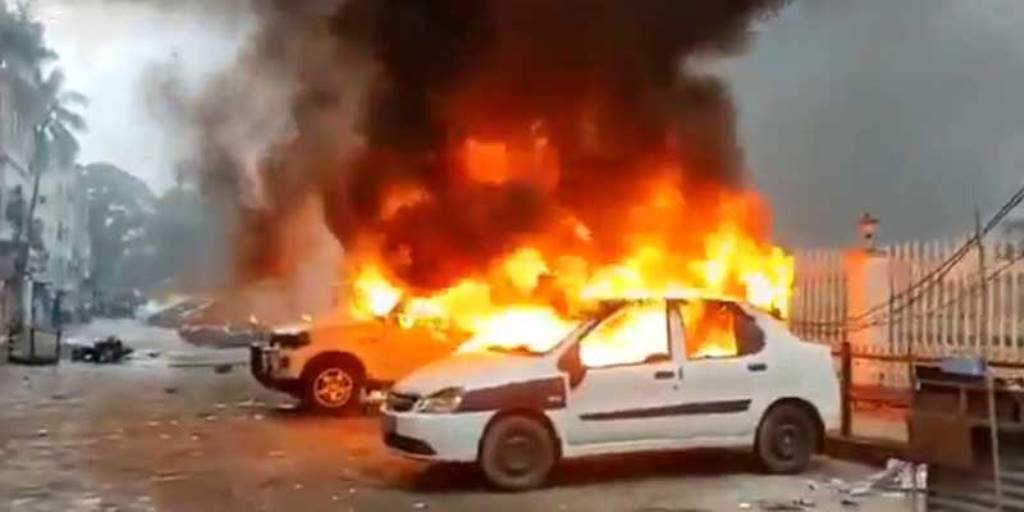 Agartala:At least 30 people of both ruling BJP and opposition Congress were injured in two separate political clashes in Tripura while a CPI(M) party office was vandalized in the last 24 hours, triggering tension across the state.

The CPI-M on Saturday held a rally in the city protesting the increasing incidences of violence on the opposition parties, vandalizing party’s office at Mirza of Udaipur in Gomati district on Friday and assaulting at least five CPI(M) leaders in last three days.

The party that hosted the rally marched to Raj Bhawan against the alleged misrule of BJP, atrocities on the common people on the anniversary of farmers’ protest and eight other demands. However, it was prevented on VIP Road where CPI-M leaders addressed the gathering, calling upon the people to oust the BJP led government.

They called the people to resist all violent attempts of BJP during elections and said, violence was stepped up by the ruling party cadres soon after the Election Commission of India (ECI) officials visited poll-bound Tripura and began the election process to be held in February next year.

“We never indulged in violence and encourage our cadres to get involved in unlawful activities but, BJP led government has been continuously terrorizing the situation and carrying out violence on opposition supporters for 57 months. Now, the time has come to resist the attackers to prevent BJP from coming to power,” said senior CPI-M leader Pabitra Kar.

He alleged that CPI(M) office at Mirza had been attacked repeatedly by the BJP miscreants ever since the BJP-IPFT government had come to power in 2018. The office stood deserted and only three days ago it was reopened.

Meanwhile, Congress alleged that their Bharat Jodo, Tripura Bachao rallies were attacked at Suryamaninagar near Tripura University and Golaghati in Sepahijala district and Santirbazar of South Tripura, which left at least 20 Congress supporters injured.

About 10 BJP supporters were also injured in the retaliatory attack and finally, they ran away.

Later, Congress delegation led by MLA Sudip Roybarman met the Director General of Police seeking a reply to why are BJP goons attacking opposition supporters in front of police and why police didn’t take action against the perpetrators despite specific complaints.

“Police and criminals are hand in glove under the guidance of ruling BJP. However, the delegation told the DGP it will be the last chance if police fail to discharge it’s duty independently, Congress will move to appropriate forum seeking redress and be forced to retaliate for survival,” Roybarman warned.