The first phase will cover 89 constituencies on December 1 and the second phase the remaining 93 seats on December 5. 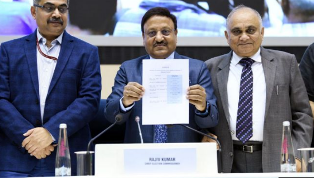 New Delhi: The Election Commission on Thursday announced the schedule for Gujarat Assembly polls for its 182 seats spread across 51,782 polling stations, on December 1 and 5.

The first phase will cover 89 constituencies on December 1 and the second phase the remaining 93 seats on December 5.

The counting of votes will be held on December 8 along with Himachal Pradesh, Kumar said.

The date of issue of notification for the first phase would be November 5, while for the second on November 10, the CEC said.

The last date for withdrawal of candidature is November 17 and 21, Kumar said.

Taking the opportunity, the CEC appealed to voters to come out at large numbers and exercise their franchise as he also cautioned parties to fall in line with poll panel’s directions.

There are around 4.90 crore voters in the state whom the BJP, Congress and Aam Aadmi Party will principally try to woo to come to power.

The BJP has been in power for 27 years now, while the Congress, which gave a tough fight in 2017, is being ridiculed by the saffron party at large saying they don’t stand a chance.

The contest this time will also see AAP making its bid in the western state.

Announcing a slew of measures being taken, Kumar said the ECI Suvidha Portal will provide online nomination and affidavit facility to candidates and political parties. Permissions for rallies, meetings can also be applied online.

Coast guards have been directed to keep strong vigil on any movement of drugs, said Kumar as the poll panel is set to put all precaution in place regarding liquor, cash and drugs to prevent misuse of voters.

We are focussing on urban apathy seriously to improve voter turnout, Kumar added, saying an EC team is going to the last mile to ensure inclusive elections.

As a unique initiative to facilitate voters and ensure no voter is left behind, a PS will be set up in a shipping container at Aliabet in the Bharuch district with AMF for 217 voters. Earlier voters travelled 82 kms to vote, the EC also tweeted.

Polling stations are set up in Madhupur Jambur in Gir Somnath district for the Siddis, the EC said, adding “Siddis are descendants of East African people who came to India during the 14th and 17th century and now resides here and are our proud voters.”

For the first time, to motivate young voters, 33 polling stations will be set up managed by youngest available polling staff.