The Civic staff reportedly issued a notice alleging that the former Minister had grabbed cents of land belonging to the irrigation department. 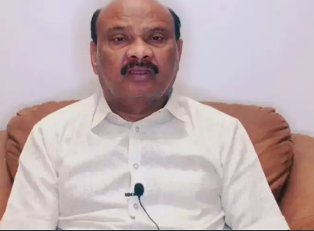 Anakapalle (Andhra Pradesh): CID officials arrested former Minister and Senior Telugu Desam Party leader Chintakayala Ayyanna Patrudu and his son at his residence in Narsipatnam in this district in the early hours of Thursday for allegedly submitting forged documents in a land encroachment case.

Based on the complaint from the irrigation department that the TDP leader encroached on the land by submitting forged documents, the CID personnel registered a case before arresting the TDP leader and his son.

The duo will be produced before the court.

In June this year, Municipal staff demolished the compound wall at the TDP leader’s house at Narsipatnam on the charges that it was built on encroached land.

The Civic staff reportedly issued a notice alleging that the former Minister had grabbed cents of land belonging to the irrigation department.

The former Minister’s wife alleged that his husband was arrested by the police without issuing any proper notice.

She also alleged that the harassment has been increased on her husband after YSRCP came to power in the state.

Following the arrest of Patrudu and his son, TDP leaders and workers staged strong protests at various places in the state and alleged that YSRCP leaders had been harassing the TDP leaders and activists as part of political revenge.