Storm Nalgae caused the most havoc in Maguindanao province, on Mindanao island. There is extensive flooding in and around the city of Cotabato, a BBC report said. 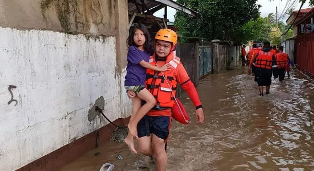 Manila: A severe tropical storm has killed at least 45 people in the Philippines, unleashing floods and landslides in southern provinces, officials say. Earlier on Saturday officials gave a death toll of 72, but that has been revised.

Storm Nalgae caused the most havoc in Maguindanao province, on Mindanao island. There is extensive flooding in and around the city of Cotabato, a BBC report said.

Rescuers pulled many bodies from thick mud after landslides. The storm winds are gusting at up to 95kmph.

Heavy rain began on Thursday and the storm is expected to reach its peak this weekend. The storm has also forced some schools to close and buses to stop running.

The Philippines typically experiences 20 typhoons or tropical storms annually. They come from the Pacific Ocean, and Nalgae is not a particularly strong one – it is, however, very large, covering much of the country, and very wet.

The emergency services are well practiced in responding to big storms, but the huge volumes of water have made rescuing stranded people difficult.

Some areas have recorded their highest-ever daily rainfall. Flash floods and landslides are always one of the greatest dangers in the Philippines, with its unstable geography and deforested mountains.

Warnings have been issued over possible mudslides on the slopes of the biggest volcanoes, the BBC said.