Dhaka, Bangladesh capital is 2nd most polluted city in world

Russia's Krasnoyarsk ranks first and Pakistan's Karachi ranks third, with AQI scores of 306 and 224, respectively, on the list of the world's top cities for air pollution. Air quality is generally considered "risky" if the AQI value is above 300. 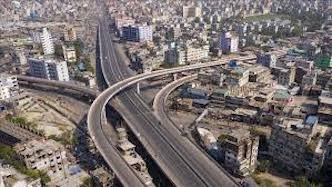 Dhaka: Bangladesh’s capital Dhaka is the second most polluted city in the world. Dhaka Air Quality Index (AQUI) 302 was recorded at 8:57 am on Sunday (January 23). which is considered “dangerous”.

Russia’s Krasnoyarsk ranks first and Pakistan’s Karachi ranks third, with AQI scores of 306 and 224, respectively, on the list of the world’s top cities for air pollution. Air quality is generally considered “risky” if the AQI value is above 300.

In this case, the doctors have advised the citizens to limit their outdoor activities. The AQI index, based on daily air quality, informs people about how clean or polluted the air in a particular city is and what kind of health risks may arise for them. AQI in Bangladesh is determined based on five types of pollution – particulate matter (PM10 and PM2.5), NO2, CO, SO2 and ozone (O3).

According to a March 2019 report by the Department of Environment and the World Bank, the three main sources of air pollution in Dhaka are brickfields, vehicle smoke and construction site dust. Air quality in Dhaka usually becomes unhealthy in winter and somewhat improves during monsoon.

As winter approaches, the city’s air quality begins to deteriorate rapidly due to the massive emissions of pollutants from construction work, roads, brickfields, and other sources. According to several studies, air pollution continues to be one of the leading causes of death and disability worldwide.