Addressing the members of the Mizoram Legislative Assembly, the President said the topography of the hilly region poses special challenges for development. 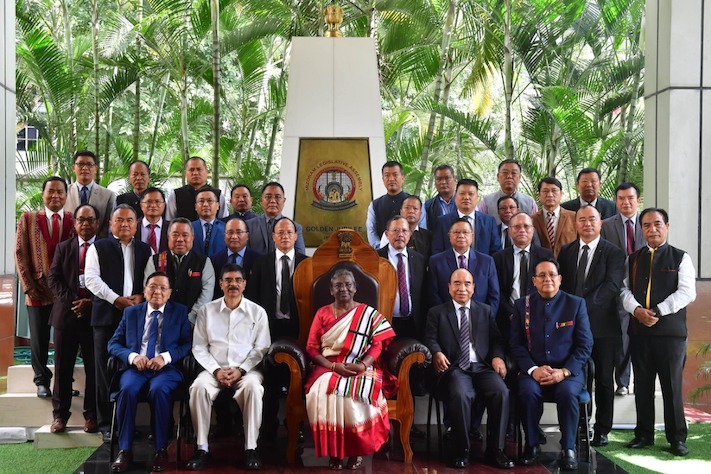 Aizawl: President Droupadi Murmu on Friday said that the development of Mizoram and the rest of the North-East is significant for the nation to scale greater heights.

She said India’s stature on the global stage has been rising.

“Our ties with the neighbours, especially in South-East Asia, are of high value to us. Our ‘Act East Policy’ places emphasis on the North-East for improving our ties with the extended neighbourhood in the Asia-Pacific region. Once an economic initiative, the policy has now gained strategic and cultural dimensions too. Mizoram benefits from, and also contributes to, the nation’s endeavour to engage with the neighbours in the region,” said Murmu.

Addressing the members of the Mizoram Legislative Assembly, the President said the topography of the hilly region poses special challenges for development. Yet, Mizoram has done remarkably well on all parameters, especially regarding human development.

She said taking education and healthcare as twin pillars of good governance, policymakers and administrators have rightly laid stress on improving facilities for the two sectors.

The President said connectivity is bound to be the biggest factor in realising the potential of such a region. The development of village roads, highways and bridges not only helps in meeting education and healthcare goals but also unleashes economic opportunities

The President said this is the era of new technology which has been put to use to serve people more effectively. She advised that while embracing the modern ways, there is a need to remain in touch with the roots.

Murmu said as a tribal majority state, Mizoram can explore its past and find best governance practices from pre-modern days that can be revived within contemporary systems.

Noting that the Mizoram Legislative Assembly celebrated its golden jubilee in May, the President said over the years, it has evolved a model of debate, healthy discussion and mutual respect as an effective instrument in finding solutions to people’s problems.

The President said in Mizoram, women are an empowered lot in every sphere of life, be it sports, culture or business. She highlighted that there should be an increased representation of women in public life, particularly among lawmakers in the state.

She said: “With our rising influence on the world stage, come more responsibilities. In climate action, for example, we have taken a lead, showing the world the best way to counter the effects of environmental degradation. Our multiple initiatives in promoting renewable sources of energy have won admiration around the world.”

“Meanwhile, we – as individual citizens, policymakers, lawmakers or administrators – must strive at our level to help heal the planet. Mizoram has the highest forest cover among all Indian states, providing an ideal home for extraordinary and rich biodiversity. The Himalayas, its fragile ecology and flora and fauna are our priceless heritage. We must conserve them for generations to come,” Murmu added.