Cross-Cultural Identities – A Dialogue Through Art

The art camp was organised by the Positive Energy Art Foundation and inaugurated by F R Kharkongor, IAS, Commissioner and Secretary to the Government of Meghalaya, Arts and Culture Department. 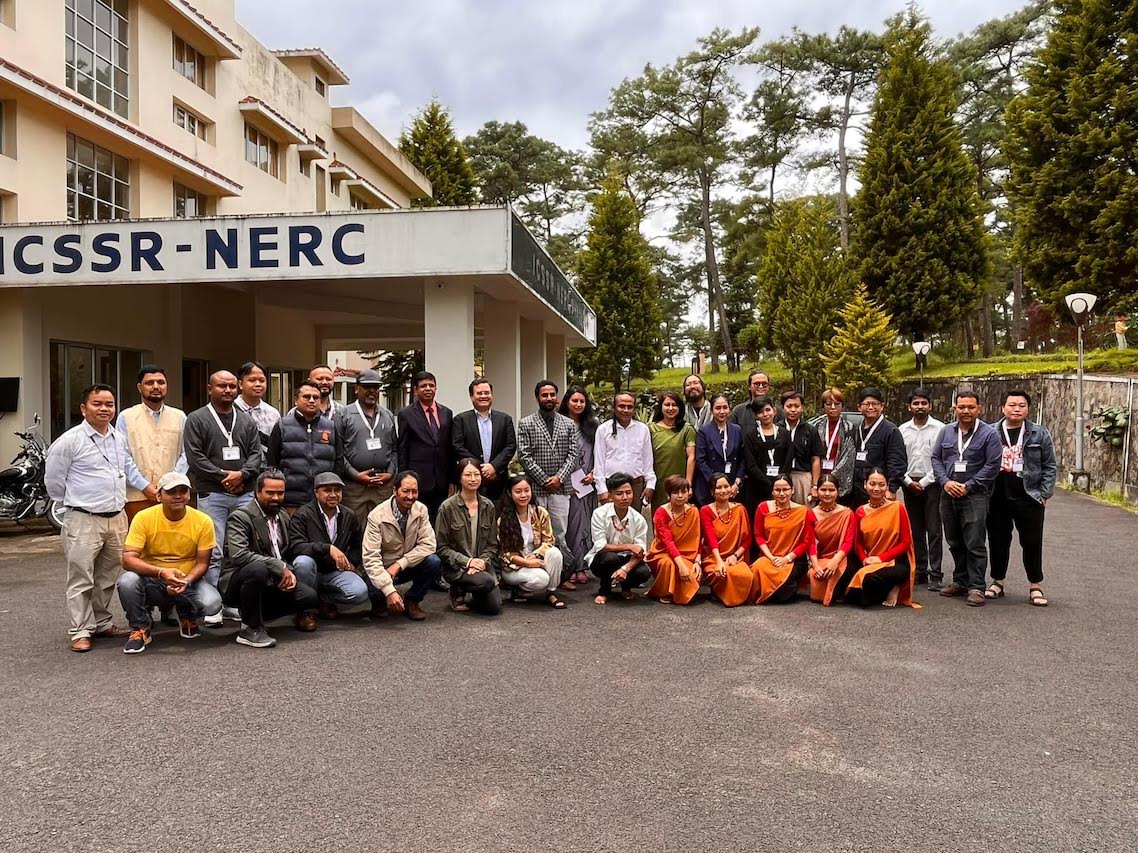 Shillong: A galaxy of artistic luminaries was in Shillong for the five-day art workshop on Cross-Cultural Identities- A Dialogue through Art starting from 4th July and concluding on 8th July 2022 at ICSSR Complex, North Eastern Hill University.

The art camp was organised by the Positive Energy Art Foundation and inaugurated by F R Kharkongor, IAS, Commissioner and Secretary to the Government of Meghalaya, Arts and Culture Department.

In his inaugural address, he said “Industrial age sought to seek convenience for the people with automation, then the age of information created a synthesis among various social and cultural expression and value clarity on every aspect of human society; the present era is the age of imagination where creativity is nourished and connectivity to mankind is being facilitated through art’.

In the context of the participation of several foreign delegates from across the eastern world, Kharkongor stated, “Art is a great connector and dissolves boundaries and thereby created a repository of creativity for artists to flourish”.

The art camp was supported by ICSSR- NERC with academic deliberations on the various facets of cultural and aesthetic growth and development presented by distinguished scholars of some universities from Thailand, South Korea, South Africa, Sri Lanka, and India.

Prominent among the paper presentations and lectures in the entire sessions are the overview of North-East traditional arts and culture growth by Dr. Moushumi Kondali, the Contemporary Art Interpretation of Naka, the mythical serpent known as Nantopanantthasut Kamluang by Dr. Nawat Lertsawaengkit of Silpakorn University, Thailand, the Art in the Symbols of Southern Thailand Boats by Dr. Khan Payungphan of Phuket Rajabhat University, Thailand, besides the local deliberations on the Folkloristic Connection in Khasi Contemporary Art and the Quest for Visual Identity by Benedict S Hynñiewta and the Absence of Tangible Image Depiction in Khasi  Visual Art Tradition by Raphael Warjri.

In the subsequent sessions, the artists demonstrated their creativity through paintings on canvases and creative performing arts in the open spaces of the sprawling surrounding ICSSR complex at NEHU.

The performance was conducted by Dr. Ajay Kumar Sharma of Chitkara University, Punjab, and independent performances by Dr. Sukumala Nithipattaraahnan of Silpakorn University, Thailand, Dr. Keawtrakan Kunlabon of Thailand, Yihwa Kim of South Korea, Pittawan Suwapab of Thailand and Hyoji Park of South Korea. Most of the concepts of the performances emphasized the impact of human intervention on the globe and the deterioration of nature and the synergy of local Khasi culture with a universal viewpoint from the respective art performers.

The valedictory session was graced by Prof Bhagirathi Panda, Honorary Director ICSSR- NERC, and Munish N Singh, Director, Indian Council for Cultural Relations, Shillong. The chief guest, Prof Panda stated that social science studies could accelerate the nourishment and development of art and likewise, art should be able to facilitate the progress of society and mankind to enrich civilization.

The guest of Honour, Munish N Singh commended the effort of Positive Energy Art Foundation in bringing a host of arts academicians and scholars from abroad and committed that the endeavour is within the mandate of ICCR, which could be brought to a different level in the near future to provide the desired exposition of North East India tribal and indigenous arts. The valedictory address was delivered by Shri Raphael Warjri, while he recalled the international art events that took place in the State of Meghalaya.

He said that the first-ever international art camp was organized in 1999 under the theme of the numerical 9/7, which has universal significance with various cultures across the globe, then the Thoh Shun International Art Camp in 2006 was organised by the Riti Academy of Visual Arts with the participation of artists from Europe and Asian countries.

However, he cherished the multi-disciplinary art workshop on cross-cultural identities organised by Positive Energy Art Foundation, which addressed the dynamics of local aspirations in relevance to international exposure of regional indigenous art and cultural expression.

The objective of the multidisciplinary art workshop under the initiative of Dr. Prakash Kishore is to create opportunities for local artists of the region for exposure in the international arena and strengthening international relations through art and cultural exchange.

The various theoretical sessions and organisational aspects were conducted by Dr. Umeshwari Dkhar with the support of passionate individuals and knowledgeable resource personnel of the society. All the participating artists were felicitated and presented with mementos and certificates by distinguished guests during the concluding function including the art exhibition of the artworks executed during the five-day art camp.