Allegedly, a group of miscreants with the influence of BJP attacked the Chairman of Tipraha Indigenous Progressive Regional Alliance (TIPRA) royal scion Pradyot Kishore Debbarman at the office of the Sub-Divisional Magistrate (SDM) of Mohanpur 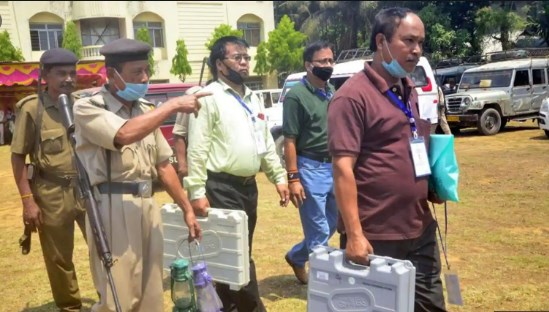 Agartala: The counting of votes for 28 –member Tripura Tribal Areas Autonomous District Council (ADC) began this morning across 16 locations amid high tension following a series of incidents since the day of polling on April 6 last.

However, Director General of Police (DGP) V S Yadav said adequate security measures have been put in place in the counting halls and surrounding areas while crowd was banned in the nearby areas of the counting to prevent any untoward escalation of tension.

“Police have started investigating into each and every allegation of violence that were reported on the day of polling and afterwards. We have also taken all preventive steps in some sensitive locations and mixed populated areas to maintain peace while political parties have been requested to control their supporters even after they win or lose the election,” Yadav said.

Allegedly, a group of miscreants with the influence of BJP attacked the Chairman of Tipraha Indigenous Progressive Regional Alliance (TIPRA) royal scion Pradyot Kishore Debbarman at the office of the Sub-Divisional Magistrate (SDM) of Mohanpur when he went to discuss the matter of not issuing counting pass and providing adequate security to his party candidates.

“At my arrival in the office, over a hundred of youths with sticks and sharp weapons encircled us in the presence of police. Somehow we managed to take shelter in SDM chamber but the vehicles were vandalised. They ransacked the office for about half-an hour but police didn’t take any action. The helpless condition of police made us believe that the attack was pre-planned to scare my workers away from counting hall so that they can manipulate the votes in their favour,” Pradyot Kishore alleged.

He alleged that BJP MLA of the area, education minister Ratan Lal Nath, who has hurled personal insults on Pradyot and instigating BJP workers against TIPRA on communal line for past few days was behind the attack on Pradyot and SDM’s office and added, “The appearance of police officers made it clear that they were instructed not to prevent the attack and arrest the attackers.”

Both the Chief Minister and DGP had spoken to Pradyot at night and assured action against the perpetrators but as of now none were arrested. Instead, BJP and its leaders accused Pradyot Kishore of indulging in the attack to disturb communal harmony anticipating the debacle in ADC result, which further escalated the tension among the tribals across the state.

The hundreds of irritated tribals came on Agartala – Khowai road, Jirania, Champaknagar and Mungiakami on national highway protesting the attack on Pradyot and attacked some passenger vehicles and assaulted innocent people.

According to report, TIPRA supporters have been assembled in a large number since last night to the counting halls after a rumour that BJP was planning to replace the EVMs with the help of administration before counting.

The opposition parties including CPI-M were aggrieved after state election commission set up the counting halls in non-ADC areas and allowed counting agents of the parties from non-ADC areas violating the rules.

However, a writ petition has been filed against the election commission in Tripura high court accusing of favouring ruling BJP.