"Where did this Ábba Jaan' come from? This is an indication that elections are close. They are remembering shamshan (crematoriums) and kabristan (burial ground)," Congress Spokesperson Gaurav Vallabh said. 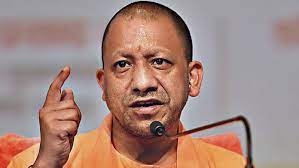 New Delhi: Congress on Monday slammed Uttar Pradesh Chief Minister Yogi Adityanath over his “Äbba jaan” comment, and said it was a signal that elections are coming close in the state.

“Where did this Ábba Jaan’ come from? This is an indication that elections are close. They are remembering shamshan (crematoriums) and kabristan (burial ground),” Congress Spokesperson Gaurav Vallabh said.

“Same tactic can’t work again and again, people are asking where were you when hundreds of bodies were floating in the Ganga? Where was he when thousands came back on foot,” he said.

Yogi Adityanath reportedly said on Sunday at an event in Kushinagar that it was only after his ascent to power in 2017 that the public distribution system became effective in Uttar Pradesh where ration meant for the poor used to be eaten up by “those who say Abba Jaan”.

“Under PM Modi’s leadership, there is no place for appeasement politics… Before 2017 was everyone able to get ration? Only those who used to say ‘Abba Jaan’ were digesting the ration,” Adityanath had said at an event in the state’s Kushinagar on Sunday.

The Congress Spokesperson said the floating dead bodies in the rivers that were seen by the world brought shame to India.

“You made India’s head bow with shame on the international platform. WHen New York Times, Washington Post, showed photos of bodies floating on water our heads were hanging in shame,”he said.

“Änd yet the Prime Minister said he (Yogi Adityanath) did a good job in controlling covid,” Vallabh said.

“In last 4 years, 6 months, can you give me any development project? Can you name any big company of the company or the world, which had entered into Uttar Pradesh?” he added.

He also slammed the government for giving a nod to sell 30.8 per cent out of its 54.8 per cent holding in CONCOR and management control to strategic buyers.

” Why a Navratna company that is of strategic importance, consistently generating a profit and declaring average dividends of Rs. 365 Crores per year in last 4 years is decided for disinvestment?” he questioned.

“How can railway land acquired from farmers of our country at a concessional rate and in many cases, farmers donated this land free of cost to railways for expansion, maintenance, and development of railway infrastructure in our country can be handed over to a private party for commercial use in a backdoor arrangement,” the Congress leader said.