Under the Indo-Bangla agreement, India would use the waterways of five Bangladesh ports - Mongla- Tamabil-Chittagong-Sheila, and Bibirbazar to export and import goods between seven northeastern states of the country. 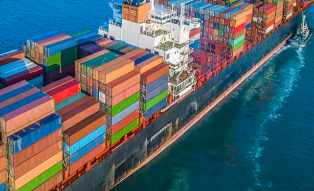 ” We have successfully completed four trial runs, including that of the last which was done ahead of scheduled importing tea from Assam on November 7 ,and now expecting the routes to be operationalised for cargo vessels in next six to 12 months,” Rahi told reporters while demonstrating a container was being unloaded at the Netaji Subhas Dock (NSD) in the city.

Under the Indo-Bangla agreement, India would use waterways of five Bangladesh ports – Mongla- Tamabil-Chittagong-Sheola and Bibirbazar to export and import goods between seven northeastern states of the country. The waterways would drastically reduce both time,cost and help to grow the economy, according to SPMP traffic manager RS Rajhans.

” After unloading the cargo at the Bangladesh ports, the containers would be carried out through roadways to all the northeast states,” he added.

” Rice, Atta, edible oils, salt, polymer products steel and other essentials to be despatch from Kolkata port to majority of the Northeastern states – Assam, Tripura, Meghalaya, Mizoram, Manipur, and tea and mineral products would be imported from those states,” Rajhans added.

” Bangladesh will also be benefitted as the neighbouring country will earn ( money) by charging fees for usage of ports,” he maintained. Incidentally Bangladesh is one of the major Indian trading partners as some 10 million US Dollars is traded between the two neighbouring nations,” said Rajhans.

” There are some issues related to custom protocol, stakeholders’ awareness and the development of roads infrastructure in some places which need to be addressed and we are doing now,” said the deputy chairman Samrat Rahi.

” Use of Chattogram and Mongla Ports in Bangladesh for movement of goods to and from North-Eastern region is a significant step in the Act East policy. For India, in particular, transit and transhipment across Bangladesh is important, as it is expected to boost the economy of India’s Northeast. Developments in connectivity are imperative for transforming India’s eastern and north-eastern states and to operationalize the ACMP for movement of goods,” Rahi added.