Kashmir braces for yet another wet spell from Nov 9

Srinagar experiencing cold weather conditions with an overcast sky after widespread rainfall caused on Monday and recorded a low of 4.3 degrees Celsius on Tuesday. 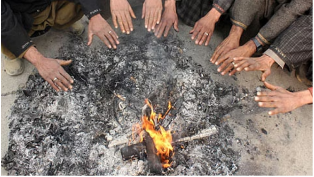 Srinagar: The Kashmir Valley is bracing for a wet spell as mercury has dipped and sky remains overcast with chances of isolated to scattered light rain, snow and traces over Jammu and Kashmir forecast on Tuesday.

A Meteorological Department forecast of light to moderate rain/snow over higher reaches at many places during Wednesday evening to Friday forenoon. However, there are no forecast of any major rain/snowfall during this spell.

Project Beacon, Border Roads Organisation (BRO) responsible for the maintenance of the road have pressed into service their men and machines to clear the snow from Zojila pass Gumri, India Gate, Capt Mode, Ranga Mode on the Ladakh highway.

Machhil road in frontier Kashmir district of Kupwara and Bandipora road in Gurez, north Kashmir were also closed due to accumulation of snow.

However, traffic on Srinagar-Jammu National highway is plying normally.

Travelers though have been advised to undertake journey on the highway only after confirming the status of road from Traffic Units of Jammu and Srinagar as a precautionary measure.

Srinagar experiencing cold weather conditions with an overcast sky after widespread rainfall caused on Monday and recorded a low of 4.3 degrees Celsius on Tuesday.

Tourists on the fashionable Boulevard road on the bank of Dal Lake were seen in warm clothes and headgears leaving for outings for the day.