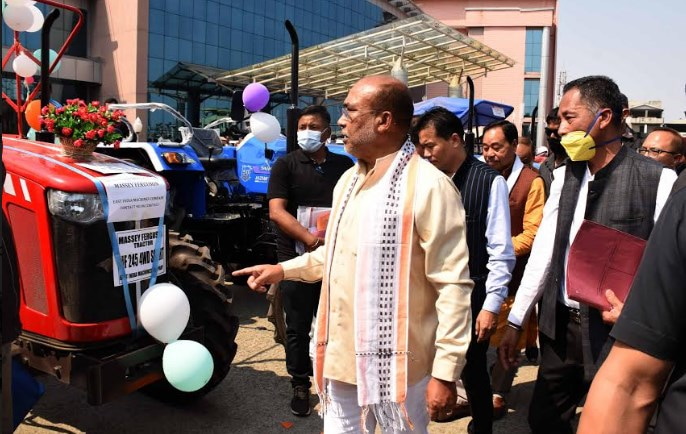 Speaking at the occasion, N. Biren said that agriculture is an important sector which has largely contributed to the economy of the country. As such the State Government had taken up certain measures to save agricultural land with coordination among various Departments of the Government. Stating that possession of tool kits as a priority for developing any product, he announced that the financial assistance given to handicraft artisans would be increased to Rs. 20,000 from next year.

Informing that an exhibition of local product “Mai-own 2021” is being organized from 16th to 22nd March at Hapta Kangjeibung, he stressed on the needs for reviving the old food items and culture of the State. He added that the State has been advancing towards development in different fields due to the contributions and support of the people.

The Chief Minister expressed his unhappiness that the population of Sangai deer in the Keibul Lamjao National Park had decreased considerably due to human encroachment causing degradation of their habitat. He further informed that a committee had been constituted to look into the matter. With the aim to protect the wildlife and the environment, he informed that the State Government had come up with the plan to reward the villages which had put a firm commitment to conserving wildlife and the environment.  He also announced that villages of Tamenglong which had put efforts to protect Amur Falcons would be rewarded.

Delivering his presidential speech, Thongam Biswajit said that the distribution programme was organized as a part of celebration of 4 years completion of the State Government. The assistance had been given to artisans and farmers to enable them improve their working environment, product standardization and capacity building. This would facilitate them in bringing up their products to international platforms, he added.

He further added that the State Government under the leadership of N. Biren Singh had been taking up welfare measures and providing benefits to the targeted population maintaining complete transparency. He appealed to the farmers and artisans to coordinate with concerned authorities in order to avail benefits under certain schemes.

Under the North Eastern Region Textile Promotion Scheme, 3000 handicraft artisans will be provided financial assistance to buy tool kits of which 1500 will be benefited in the 1st Phase and the remaining in the 2nd Phase.