An afforestation drive was also held as a part of the field visit Monday at SDO Kasom Khullen office. 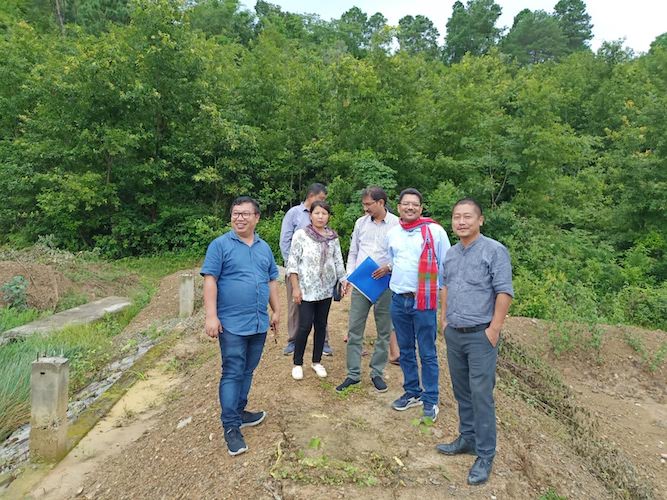 Kamjong: A Central team of Jal Shakti Abhiyan Monday conducted a field visit to various villages of Kamjong district to get a ground reality of the various works taken up under this campaign.

The team was led by the Director, Ministry of Labour and Employment (and Central Nodal Officer of JSA-CTR), Manoj Kumar Gupta, and Scientist C as the technical officer, PK Dorle, and was accompanied by SDO Kasom Khullen and district officials of PHED, Kamjong.

The team visited five sites: Tamaram village, MI Project at Kasom Khullen, K Somrei village, Khamlang village and K Leihaoram village. Out of these, K Somrei and K Leihaoram villages are Amrit Sarovar sites. It may be mentioned that under this JSA:CTR, each district over the entire country should have 75 Amrit Sarovar project sites each, and at least 20 sites should be set up for the initial phase by the end of this year.

An afforestation drive was also held as a part of the field visit Monday at SDO Kasom Khullen office.

Regarding the visit, Manoj Gupta said that earlier, this Abhiyan was initiated only in those districts where water scarcity is an issue. Still, the Government now realizing the importance of water resources to each and everyone has decided to implement it in all the districts of the country.

The team is on a five-day visit to Manipur to oversee the Abhiyan works taken up in Kamjong and Ukhrul districts. He added that water-harvesting techniques will also be developed in the block offices of the districts in consultation with the SDOs concerned.

The Central Nodal Officer also appealed to the village chiefs, villagers, CSOs and other stakeholders to inculcate the habit of ‘catching’ the rain to solve the issue of water scarcity. He opined that Manipur, in spite of having a high rainfall rate, is still facing water scarcity, even in hill villages where it is least expected. Shri Manoj appealed all to practice water conservation and to enrich the water table too.

It is worth mentioning that the Jal Shakti Abhiyan: Catch the Rain campaign was launched by the Hon’ble President of India on March 29, 2022, and is being implemented from 1st April 2022 to 30 November 2022. The main one is ‘Catch the Rain, where it falls when it falls’. Water Conservation and Water Harvesting, Renovation of Traditional and other Water Bodies, Reuse and Recharge Structures, Watershed Development, Springshed Development, setting up of the Jal Shakti Kendra in all districts, Intensive Afforestation, etc are some of the targeted activities under this campaign.

The Central team and the PHED officials will further visit four more villages of the Kamjong district on Tuesday.