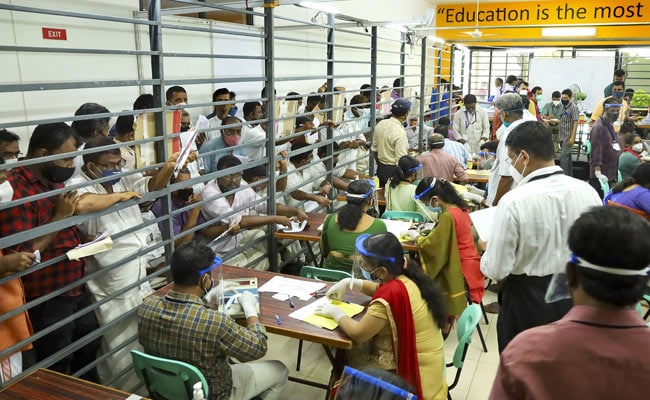 New Delhi: The Election Commission of India Wednesday said that candidates will not be allowed inside vote counting centres on Sunday without a negative Covid report or two vaccine doses. Earlier, the election body had banned any victory celebrations over the results of recent elections held in Bengal, Tamil Nadu, Kerala, Assam and Puducherry amid a massive Covid surge in the country.

In a new order Wednesday, the Election Commission banned any public gathering outside counting centres on May 2 (Sunday). Candidates and their agents will be allowed only after a negative RT-PCR test that is not more than 48 hours old.

The candidates have to produce a negative RT-PCR report or Rapid Antigen Test report or vaccination certificates received at least 48 hours before the start of counting.

Candidates will need to provide a list of counting agents three days before counting day.

On Tuesday, the Election Commission banned all victory processions on the day of results.

Elections were held in the states – Bengal votes in the final round tomorrow – amid a huge rise in coronavirus cases in the country. Crowded campaigns and roadshows by leading parties and politicians drew anger and criticism as Covid safety rules like masks and distancing were completely ignored.

But it was only last week that the Election Commission enforced restrictions on the campaign and limited the crowd size to 500, hours after Prime Minister Narendra Modi cancelled his visit to Bengal for a series of rallies citing a Covid meeting, the NDTV reported.

Earlier this week, the Madras High Court accused the election body of “wanton disregard” and “silence” on political campaigns that violated Covid rules and said “at no cost can counting become a catalyst for a further surge”.

The court during arguments ripped into the Election Commission saying: “Your institution is singularly responsible for the second wave of COVID-19. Your officers should be booked on murder charges probably…Were you on another planet when the election rallies were held?”

The Election Commission, in its response yesterday, said maintaining Covid protocol is the responsibility of state authorities and that the poll body had issued many directions on this.