Buying oil from Russia works to our advantage: Jaishankar

The minister's remarks came while he was addressing a press briefing following talks with the Russian Foreign Minister. 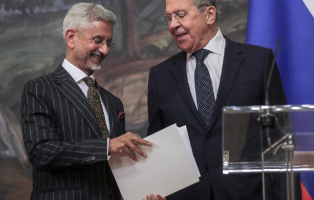 Moscow: Responding to a query on imports of Russian oil following bilateral talks with Russian counterpart Sergey Lavrov, External Affairs Minister Dr S Jaishankar said that “buying oil from Moscow works to India’s advantage” and “he would like to keep that going.”

The minister’s remarks came while he was addressing a press briefing following talks with the Russian Foreign Minister.

“As the world’s third-largest consumer of oil and gas, a consumer without a high level of income, our fundamental obligation is to ensure that Indian consumers have the best access to the most advantageous terms in the international markets,” the EAM said talking about stress on the energy market.

“In that respect quite honestly, India Russia relationship has worked to our advantage. So if it works to my advantage, I would like to keep that going,” he added.

While India continued to maintain its position on Ukraine conflict advocating a return to dialogue and diplomacy, the Russian Foreign Minister Lavrov said that India and Russia are united by historical ties characterized by mutual respect, self-sufficiency, “resistance to fluctuations in the geopolitical situation.”

Lavrov welcomed the “positive dynamics” of bilateral trade and said that the two countries would soon achieve the annual trade turnover to 30 billion USD.

“By September 2022, compared to the same period last year, the trade turnover added 133 per cent, almost reaching the mark of 17 billion US dollars. We are sure that the goal set by the leaders of Russia and India to increase the annual trade turnover to 30 billion USD will be achieved soon,” the Russian Foreign Minister said.

External Affairs Minister Dr S Jaishankar arrived in Moscow on Monday evening. This is the fifth meeting between both leaders this year. His visit assumes significance as India is being billed as a potential negotiator between Russia and Ukraine.

Prior to Dr Jaishankar’s visit to Moscow, Russian President Vladimir Putin showered praises on Modi calling him a “true patriot”.