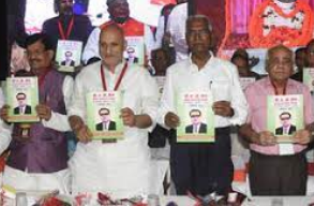 Panaji: Goa Trinamool Congress on Wednesday alleged that Chief Minister Pramod Sawant was trying to secure his position in the government by threatening to implement Staff Selection Commission (SSC) in the state.

Accusing Chief Minister Pramod Sawant of betraying the people of Goa, D’Mello said, ‘In 2017, the BJP government promised to provide more than 50 thousand jobs to Goenkars and now the CM has promised a total of 10 thousand jobs. The CM is continuing to carry the legacy of the previous BJP government forward by taking a U-turn on the promises and fooling the people of Goa.’

Expressing his anguish over the CM’s recent statement, he said, ‘His recent announcement that a year of experience in the private sector is compulsory for government jobs is nothing short of a half-baked promise until a notification is released clarifying the date of effect.’

Bringing to the fore the agenda behind Chief Minister Pramod Sawant’s actions, D’mello said, ‘CM has decided to implement a staff selection commission to keep a check on its ministers, as according to the rumors, many ministers are conspiring against him. He has taken away the powers of ministers and cemented his position by forcing the ministers to approach him to sanction jobs.’

‘He must stop making hollow statements of what he plans for the future and should inform Goenkars of the new changes he wants to introduce properly,’ the TMC leader said.

The TMC demanded that the BJP government release a white paper on employment policy and that a retired high court judge heads the commission or alternatively, the SSC be approved by the high court.