Sangma on Sunday submitted his resignation letter to Governor Satya Pal Malik stating that he has quit the post of Chief Executive Member of GHADC on “moral ground” with immediate effect. 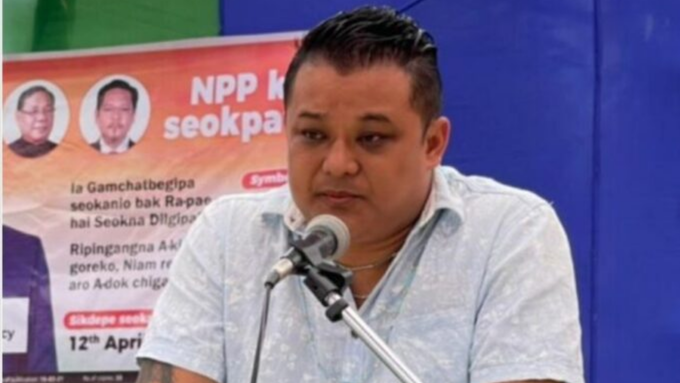 Shillong: With thousands of protesters massing in the streets of Garo Hills region in the western part of Meghalaya, Chief Executive Member of Garo Hills Autonomous District Council (GHADC) and National People Party (NPP) leader, Rakesh Sangma finally gave in to pressure and resigned to end a political deadlock.

Sangma on Sunday submitted his resignation letter to Governor Satya Pal Malik stating that he has quit the post of Chief Executive Member of GHADC on “moral ground” with immediate effect.

“As per the provision of the Sub-Rule 1 (b) of Rule 20 of the Assam and Meghalaya Autonomous Districts (Constitution of District Councils) Rules, 1951 (amended) …. ,”’ Sangma noted in his resignation letter.

Sangma was elected as CEM of GHADC on January 31 after his predecessor Benedic Marak resigned as the CEM following his defeat in the No-Confidence Motion against him by NPP MDCs.

However, Sangma occupying the top constitutional post of GHADC did not augur well as indigenous Garo pressure groups took to the streets demanding his removal alleging Sangma and his siblings have always identified themselves as ‘Newar’ and not ‘Sangma’.

“It was only prior to the GHADC elections that Rakesh (Sangma) filed an affidavit and started identifying himself as Rakesh A Sangma. We suspect that it was politically conducive for him to identify himself as a bona-fide Garo to contest the election as the seat (7 Babelapara Constituency) from which he contested was a tribal majority electorate and people may not have taken very kindly to a non-tribal candidate,” Garo Student’s Union leader, Tengsak Momin said.

“They have always practiced the culture, tradition and religious beliefs of their father, who belongs to the Newar clan of the Nepali community. We are pointing out these facts not to malign him or his family members,” he said.

“Our greatest objection of Rakesh A. Sangma being elected as the CEM of the GHADC is because the council exercises judicial power of the highest authority in all traditional civil cases. The civil cases involve sensitive issues with regards to our traditional institutions and land,” Momin said.

Momin said the indigenous Garo pressure groups will continue with the public rally on Monday at Tura town against Sangma’s appointment till an indigenous member of GHADC is officially appointed as CEM.

On Saturday, the NPP members of GHADC has chosen Albinush Marak as the new leader for the post of CEM. Under the Sixth Schedule of the Constitution, Meghalaya has three district councils – for the Khasi, Jaintia and Garo Hills.