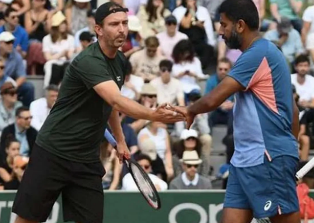 Antwerp: Second seed Indian Rohan Bopanna and Matwe Middelkoop of Netherlands were denied the doubles trophy by the Dutch duo of Tallon Griekspoor and Botic van de Zandschulp, who scored a hard-fought 3-6, 6-3, 10-5 win in the final of the European Open.

Bopanna and Matwe got a crucial break in the second game to win the opening set by 6-3 in 25 minutes.

The Dutchmen hit back by clinching the second set after breaking their rivals in the eighth game to take the crucial 5-3 lead and held their serve to win by 6-3 in 31 minutes. In the match tie-break, the rivals were tied at 3-3 before the Dutchmen wrapped up the set at 10-5 and clinched the title.

Bopanna and Middelkoop were aspiring to claim their second tour-level title as a team, after winning the trophy in Tel Aviv earlier this month.