Airport officials said that at least four ATR flights have been operating in the Agartala sector daily, which has been suspended for the day considering the weather condition. 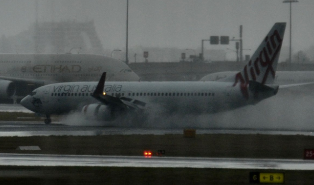 Agartala: While the Tripura government cancelled all leaves of the employees for this week, the airport authority of India cancelled the operation of all ATR flights in Agartala on Monday, and Northeast Frontier Railway cancelled the special Diwali train for two days following the warning of storm and heavy rainfall for next 48 hrs across the state with the effect of super cyclone Strang.

Airport officials said that at least four ATR flights have been operating in the Agartala sector daily, which has been suspended for the day considering the weather condition.

However, the movement of Boeing and big aircraft would be usual until a serious emergency arises.

CM Dr Manik Saha held a series of meetings till late Sunday night and reviewed the disaster management action plan being put in place to counter any eventualities.

The state government declared a holiday for all academic institutions till Oct 26 next and advised people not to come out from home unless an emergency occurs if a cyclone hits Tripura severely.

The community Diwali festival and fair organizers including Mata Tripureswari temple in Udaipur have been asked to restrict the crowd and not allow mass gatherings during the pandals.

Tripura State Electricity Corporation Ltd (TSECL) has made three alternative arrangements to ensure a steady power supply in case of any disaster.

However, rain along with gusty wind started across Tripura on Sunday night and IMD prediction said gradually the intensity of rain and thunderstorm would continue to increase till Tuesday evening when the cyclonic storm weakened. The NDRF has been asked to depute additional five teams in Kumarghat, Teliamura, Agartala, Udaipur, and Santirbazar