The increase in numbers is driven, in part, by severe shortage of the key drug - Amphotericin-B - to treat affected patients. 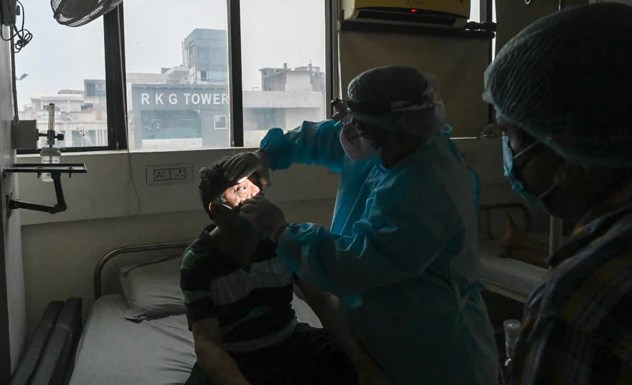 New Delhi: Black Fungus, a potentially fatal condition that is increasingly seen in recovering Covid patients, with 31,216 cases and 2,109 deaths in the country has grown over 150 per cent over the last three weeks, putting additional stress on an already embattled healthcare system fighting off the deadly second surge of Covid wave, the NDTV reported.

The increase in numbers is driven, in part, by severe shortage of the key drug – Amphotericin-B – to treat affected patients.

Maharashtra with 7,057 Black Fungus cases and 609 deaths leads the states; it is followed by Gujarat with 5,418 cases and 323 deaths. Rajasthan is the third state with 2,976 cases but Karnataka occupies third spot with 188 deaths.

Contrast this with numbers on May 25: Maharashtra had 2,770 Black Fungus cases, while Gujarat reported 2,859 cases on the same day.

At 96, Jharkhand has the least number of cases, while West Bengal with 23 has the lowest deaths.

The Maharashtra government has capped the daily rates of its treatment in private hospitals and nursing homes. Areas in the state have been classified under A, B and C categories and different rates have been fixed for the three.

Earlier this week, the Bombay High Court directed the centre to submit details of the quantity of anti-fungal drugs allocated to various states for treating Black Fungus.

In the course of hearing on a plea, the court suggested allocation of more quantity of Amphotericin-B to Maharashtra given the number of cases reported in the state.

It further added that the centre must give publicity to the do’s and don’ts of Black Fungus and ensure that citizens followed them “scrupulously.”

On its part, the centre last month asked all states to declare Black Fungus an epidemic. The Health Ministry has asked states to list under the “Epidemic Diseases Act” the rare but potentially fatal infection.

This means all confirmed or suspected cases of Black fungus have to be reported to the Health Ministry.

“In recent days we have a new challenge of Black Fungus. It is important to prepare systems to tackle it,” he said last month.

The disease, which can lead to blackening or discolouration over the nose, blurred or double vision, chest pain, breathing difficulties and coughing blood, is strongly linked to diabetes.

Experts believe the high concentration of diabetics in India can be one of the causes for the large number of cases.

The infection, worsened by the overuse of steroids, can start in the skin and invade the sinuses and other parts of the face. It requires surgery if it’s not controlled with anti-fungal therapy. Without treatment, it can cause a lethal bloodstream infection resulting in death.

No official communication from UK about issues with COVID-19 vaccination certificate: NHA