BJP may reward Modi for targeting my government: Nitish

Modi was even ignored during the cabinet expansion of the Narendra Modi government last year. 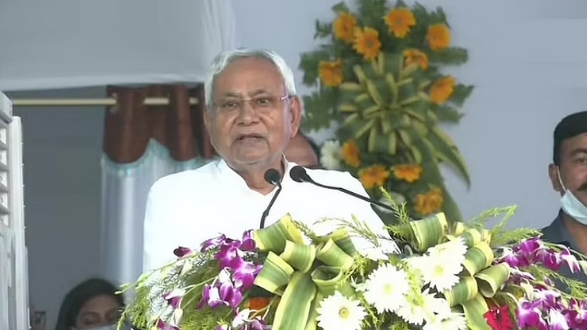 Patna: Chief Minister Nitish Kumar on Sunday made light of criticism of his government by former Deputy Chief Minister Sushil Kumar Modi, saying he could be rewarded by the BJP central leadership of BJP if he continued to target Bihar”s Grand Alliance government.

After paying tributes to former Minister Subhash Singh who died on August 16 following prolonged illness, Kumar told media persons that Singh’s demise was a personal loss for him. Singh was ill but his condition had improved recently and then his sudden death was a tragic and painful incident, he said.

Responding to a query from media persons about Modi’s claim that the Grand Alliance regime would collapse, Kumar said in a satirical tone that he should attempt to expedite the fall of his government. Modi was sidelined by the central leadership of the BJP and if he continued to target the Grand Alliance government, he could be rewarded in some way, he remarked.

As it is, Modi was not made Deputy Chief Minister again in Nitish Kumar’s government, by the Central leadership of the BJP after NDA was voted to power in the 2020 Bihar Assembly elections. Modi, however, was sent to Rajya Sabha from Bihar on BJP quota. He had been sidelined by the Central leadership of the BJP since then as no important responsibility was given to him at the Centre. Modi was even ignored during the cabinet expansion of the Narendra Modi government last year.

Kumar snapped ties with BJP and walked away from NDA on August 9 following differences on a number of issues and joined hands with RJD to form the Grand Alliance government. BJP leaders including Modi have been targeting Kumar for his U-turn since then and predicting that his new government would fall soon.