The awareness programme was organised to dissuade and seek the cooperation of the village chiefs to end poppy cultivation, said Thangboi Gangte, Additional Deputy Commissioner, Churachandpur in his opening remarks 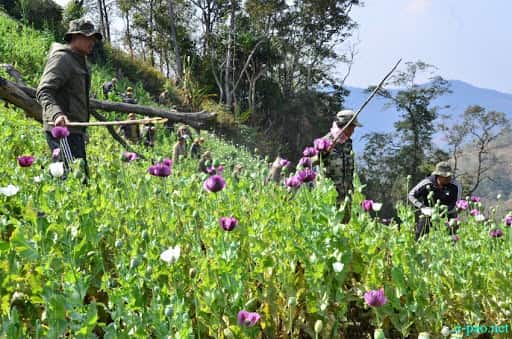 Churachandpur: With a sharp focus on environmental and social issues relating to poppy cultivation, an ‘Awareness Programme Against Poppy Cultivation’ was jointly organised by the Churachandpur District Administration and the Kuki Chiefs’ Association, Churachandpur under Nasha Mukt Bharat Abhiyan Wednesday at Kholmun community hall, Churachandpur.

The awareness programme was organised to dissuade and seek the cooperation of the village chiefs to end poppy cultivation, said Thangboi Gangte, Additional Deputy Commissioner, Churachandpur in his opening remarks. Ringing the alarm bell over poppy cultivation and the menace associated with it, Thangboi Gangte called upon all concerned to contribute their mite towards making a drug-free state and encouraged farmers to switch over to alternative livelihoods.

Speaking as the resource person, Ginzalian, District Agriculture Officer, Churachandpur underlined poppy cultivation havocs. He strongly emphasised the havoc rampant poppy cultivation will inflict, including environmental/ecological/deforestation, health hazard due to uncontrolled use of chemicals and pesticides/weedicides and soil degradation.

Another resource person, Hasby Haokip, Addl SP (IUCAW) talked about drug menace and the adverse social impact poppy cultivation will bring about. Since raw materials are easily available locally, reports about the presence of drug (brown sugar) factory in the district have started to surface. And in turn, the number of drug abusers/addicts may increase due to easy availability of drugs. It will result in gradual rise in the numbers of law and order problems, she said.

Hasby elaborated that the rising cases of ‘gang fights’ reported at different places during the past months is inextricably linked with drug abuse. Although such incidents might seem petty social problem, it has the potential to spark a flare-up in a multi-ethnic places like Churachandpur, she cautioned.

She then urged the stakeholders concerned to stop illegal poppy plantation and save posterity from being ruined.

Meanwhile, several village chiefs have expressed their appreciation to the district administration for organising such programmes. The programme was attended by village chiefs, students’ and other CSOs leaders.