“We are deeply saddened by the C-130 mishap in Sulu,” Presidential Spokesperson Harry Roque said in a statement. 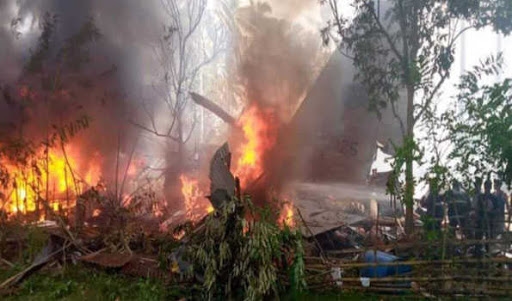 New Delhi/Manila: A Philippines Air Force (PAF) C-130 Hercules transport plane crashed on Sunday in the country’s southern Sulu province, killing at least 45 people.
The government has ordered a full investigation into the crash. Defence Secretary Delfin Lorenza in a tweet said the probe would “get to the bottom of the C-130 incident” as soon as the rescue and recovery operation is completed.
The military plane was carrying 96 people when it crashed after it missed the runway trying to regain power, Armed Forces of the Philippine chief of staff General Cirilito Sobejana in a statement.
Most the passengers were new soldiers from the infantry division training unit. Two civilians on the ground were also killed, said the official Philippines News Agency.
“We are deeply saddened by the C-130 mishap in Sulu,” Presidential Spokesperson Harry Roque said in a statement. “Rescue efforts are ongoing, and we are one in praying for the safe recovery of the passengers.”
The Western Mindanao Command earlier reported that of the 96 onboard, 50 were rescued but injured, 29 cadavers were retrieved, and 17 were still unaccounted for in the incident in Barangay Bangkal.
According to Philippine Air Force documents, the crashed plane was a second hand C-130 Hercules recently purchased from the US military.